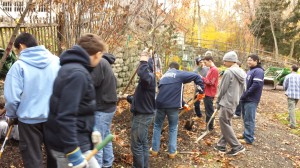 After Hurricane Sandy last October, rather than just jumping into the wrestling season, the Panthers jumped at the opportunity to help out and give back to the community.

The Panthers answered the call from the Town of Greenburgh to help clear park land severely damaged by the storm. Just over a year later, the Town again called on Edgemont Wrestling to this time return and help finish the project they started.

Last Saturday the Panthers travelled to Hart’s Brook Park and Preserve for their annual Team Community Service Project to kick off the 2013-2014 wrestling season.

At Hart’s Brook, the Panthers were able to finish clearing out some planting areas to prepare for new vegetation in areas ravaged by Sandy.

“It’s a big part of our Panther Tough philosophy – of trying to create champions on the mat and in life – to give back to the community,” said Head Coach Pete Jacobson. “To be able to come and finish the project we started a year ago is all the more significant.”

“This is always a great way to kick off the season. It’s a team-building and bonding experience for the guys, but it also set the tone for the season of living your life the right way and doing the right things,” Jacobson said.

The Panthers are hoping for a lot more good things coming their way this season as they enter as one of the teams in the mix to take home the 2014 Section 1 Championship.