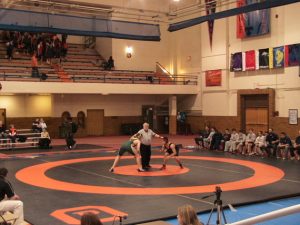 For millions of American parents, Saturdays -and Sundays— are again fully booked with carpooling, cheering from the sidelines and unfortunately soothing hurt feelings over their children’s team or individual losses. With school in session, the traditional fall sports of soccer, football and fall baseball consume the weekends for many families with a stacked calendar of practices and games.

Yes, for many there was no seasonal break, as year-round endeavors such as competitive gymnastics, swimming or any club sport continue for parents and their children who are signed on for years —all year, every year.

I know. Over the span of more than a dozen years, I logged thousands of hours in high school gyms and on the sidelines of fields as a mother of three sons, now grown. Looking back on those years in the stands, I am immensely grateful for the lessons they did not— and likely could not— learn from me. But they are lessons, nonetheless, that helped shape them.

A confession first: I have never been much of a sports team player and have always preferred solo acts like swimming, biking, walking, aerobics and lately roller skating. And in the absence of a father in our home—at first incremental, then complete—it seems my three boys were always looking elsewhere for someone other than me to emulate in athletics and beyond.

And it seems they valued advice more highly if it did not come from me. I know this is normal.

Luckily, they found what they were looking for in a sport that was about individual achievement and discipline—wrestling— and in a man, Coach Mike Powell, who remains friends with my sons still, long after each graduated from the high school sport.

It seems ironic to say because I am a feminist and believe in gender equity to my core, but raising my sons as a single parent since they were 6, 4 and 1, I was always struck by their inherent alpha male tendencies and their stark “otherness” from me. I understand that gender roles are fluid and that notions of identity are also formed by environment and family input. So it came as a surprise that almost from birth they were each more hyper-physical, daring and high energy reckless than I ever have been.

Our differences were hard to ignore from their habits to their affinities. And the sport they loved was a bridge to their separate world away from me to a place of achievement they owned without my input. It was also a bridge back to me where we could celebrate their efforts along with a community to share triumphs, losses and lessons.

I know sports are not a panacea and certainly not optimal for every child. Yes, sometimes the tragic injuries of players in youth sports make headlines and sometimes outrageous antics of parents or the cheating scandals of youth coaches make us squirm in shame.

But there is another side to youth and high school sports, the side that seems at once idealistic and intangible, but that I can attest is very real. Sports—and wrestling in particular— helped teach my boys to be good men.

Now that my sons are 26, 24 and 21, and -knock on wood—are all doing fine, I see that competing in sports and having a role model of a stellar coach gave them instructions I would not even know to share.

I am not alone here. A recent study from the International Journal of Sports Science and Coaching looked at sports participation and moral development. The researchers measured what they termed “pro-social” and antisocial behaviors among 973 student athletes in organized sports in Singapore, ages 10-18. Yes, the behaviors were self-reported, but athletes in the study rarely reported anti-social behavior such as arguing with an opponent, and more often reported pro-social behavior such as encouraging teammates. It is not the last word, but a beginning of a conversation on how sports shape behavior.

Here is a short list of what I feel my sons learned from their years of youth and high school wrestling. While they also participated in youth baseball, soccer, football and basketball, wrestling was the sport they loved and stayed with throughout middle school and high school.

1. Be on time. For years I set the clocks in our house up to 30 minutes ahead so we would not be late for school, practice, family parties or even the movies. I was always shouting, “Hurry up!” But it wasn’t until they each had a coach they respected who said over and over, “If you’re on time, you are five minutes late,” that they internalized the responsibility they had to themselves and to others for being prompt. Arriving late to practice would sometimes mean extra push-ups or laps. But arriving after the appointed 6 a.m. meet-up at the school would mean the team bus would leave without them, they would miss weigh-ins for the tournament and the chance to compete. It would also mean they may get kicked off the team.

2. There can be dignity in loss. Very few athletes win every time they compete. In wrestling, even if a wrestler was undefeated in his -and sometimes her—total record of matches, opponents would score at least some of the time in those matches. The rules are that each winner—and loser—shakes the hand of the opponent as well as the coach of the opposing team. If an athlete storms off, throws down headgear in a huff or gloats ungraciously after a win, a referee could dock points from the team for bad sportsmanship. It’s best to be humble.

3. Be involved in something bigger than yourself. Coach Powell said this repeatedly, and it translates to the critical life notion that an individual’s actions impact the whole group. I have learned that the default state of most teens is selfishness—not out of any premeditation, but out of natural cognitive and social development. Knowing you represent not only yourself, but a team, school, state —or a country— can influence your actions for the better.

4. Get used to an audience watching. Wrestling is an intense individual sport with one on one direct contact played out on a mat in a gym with an audience of parents, coaches, referees, teammates, friends and strangers able to see your every move and reaction. Yes, you can say all sports attract the gaze of many eyes on one athlete. But in wrestling, you are alone facing another person whose goal is to dominate you physically and directly. There is no hiding. And how you handle that confrontation is there for everyone to see.

5. Take care of your body. Maintaining weight in season often means foregoing an average teen diet and watching precisely what you eat and drink, knowing that if you do not “make weight” in your weight class on the day of the tournament or the night before, your team will forfeit your weight category. Being conscious of the role of diet in health is acute in wrestling and important in all sports and can impact health behaviors that last a lifetime.

6. Pay attention. You can argue that all sports require intense focus and mental acuity. But with the relentless ticking of a clock in three two-minute periods in wrestling, where any move in any second can change the outcome, it is critical to be alert at all times. You have to not only anticipate the opponent’s strategy, you have to pre-empt and react to a constant changing choreography.

7. You earn points by getting out of a hold. This might be the most important lesson of all. You can wrack up points—escape points—by freeing yourself from the hold of your opponent. There is reward and acknowledgment that you prevailed by extricating yourself from a bad situation. You can win by escape points alone; it’s a metaphor for life.

Michele Weldon is a journalist, author and emerita faculty in journalism at Northwestern University. Her most recent book, Escape Points: A Memoir is about raising her sons as a single working mother facing cancer..