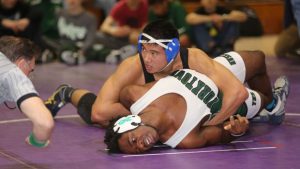 Who are the top wrestlers that you lost to graduation?
•    Kyle Aslanian
•    Max Worobow
•    Hunter Moore
•    Chris Eppolito

What is the strength of your lineup? I think filling most or all of the weight classes certainly will make a big difference for us. We have some great seniors who will be great leaders for us and that will really set the tone for everyone else. I’d say that leadership is our biggest strength.

Are there any holes you’re concerned about filling? Last year we had a lot of holes in our dual meet line-up. This year, if we stay healthy, we should fill every weight class.

Do you think you’ll be a stronger team in dual meets or in tournament settings? Hard to say at this point. Filling weight classes is obviously really important for winning dual meets. If we stay healthy we should more or less be able to do that. I think we’ll put a fairly solid kid out at each weight. In tournaments we can obviously count on guys like Cliff Wang and George Mellor to earn us a lot of points, but we also have a few guys like Andy Williams and Nick Meglino that worked hard over the past several months and we think they’ll be helping our tournament point total as well.

What is your message to your team in the preseason? Our message doesn’t really change year-to-year. Obviously we need to tweak things here and there to maximize the potential of the guys on our roster, but that’s more physical and technical. The message stays consistent: Work hard, make good choices, push each other to get better each day and trust the system.

Will you host any tournaments? The 35th Annual Edgemont Wrestling Tournament on January 28th and the Section 1/Division 2 Championships on February 10th and 11th.