Congrats to our own senior and captain Cliffton Wang for being named to the LoHud Mean 15 – the top 15 pound-for-pound wrestlers to watch in Section 1! 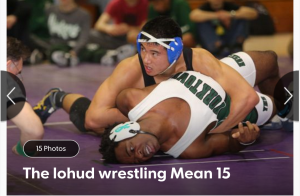 Cliffton Wang, Edgemont — Some coaches will tell you that the Harvard-bound senior represents Section 1’s best shot at a state championship this season. The three-time section champ took third in the state at 170 pounds last season. WATCH

Every preseason, one of our most difficult tasks is coming up with a list of the top returning wrestlers in our area. We’ve changed the name a few times over the years, but I think this is the most appropriate — because anyone who has been around the sport of wrestling knows that you have to have a mean streak to excel.

With more than a dozen returning state qualifiers, there were plenty of good candidates to make this year’s cut. The last few spots were the toughest to decide on, but with the help of many coaches and local wrestling enthusiasts, we were able to nail it down. To give you an idea of who just missed the cut, we’ve also listed what we’re calling The Next 15.

The final thing to remember is that wrestlers are only eligible if they hail from Westchester, Rockland or Putnam counties. We know there’s plenty of talent in Dutchess and those guys will be included when we do our weight class rankings for Section 1 throughout the season.

Without further ado, here are the best pound-for-pound wrestlers in our area…

Satoshi Abe, Putnam Valley — A two-time section champ, the Lehigh-bound senior is as smart as they come on the mat and the leader of a team with four high-end guys. He should earn All-State honors this season. WATCH

Connor Breit, Nanuet — The senior’s career arc has been similar to his older brother Dan’s, who was an Eastern States champ and All-State performer in his final season. Connor took fourth in the state at 195 pounds last year and could be the best big guy in the section. WATCH

Mikey Bruno, Putnam Valley — Only a junior, the defending 99-pound champ in Division 2 has qualified for the state tournament three times already. He took fourth in the state last season and will be in the mix again if he remains in the lighter weight classes. WATCH

Jack Chesman, Pearl River — The sophomore is the only wrestler on this list who didn’t qualify for states last year, but that was due to a freak accident in which he was dropped on his head during the sectional final. He was a champion as an eighth-grader and possesses tremendous upside. WATCH

Grant Cuomo, Brewster — Despite missing most of the regular season due to an avulsion fracture in his hip, the junior returned for the postseason to win a section title and place fifth in the state at 152 pounds. He’s expected to wrestle at 160 this season. WATCH

Evan Frank, John Jay — The senior has yet to win a sectional title in two trips to the finals, but there shouldn’t be anyone standing in his way this year. Frank earned a wild card to states last season and took third at 182 pounds. WATCH

Matt Grippi, Fox Lane — There’s only one returning state finalist in Section 1 this season, and it’s the junior from Fox Lane. He’s expected to compete at 152 pounds this year and is referred to by many coaches as the best pound-for-pound wrestler in the section. WATCH

Jake Logan, New Rochelle — The sophomore class throughout Section 1 is highly-regarded, and Logan is one of the standouts. He was the only freshman to win a section title last season and is expected to be back at 160 pounds this year. WATCH

Anthony Malfitano, Pearl River — Few were surprised that Malfitano won his first sectional title last season at 152 pounds, but it was his performance at states that turned heads. Now a senior, he took sixth in the state last season. WATCH

Sean McGarvey, Pearl River — The two-time section champ will be a heavy favorite to get his third this season and be a force at states. He’s expected to make a big jump from 106 pounds to 126 or 132. WATCH

Conor Melbourne, John Jay — It’s amazing to think that the Princeton-bound senior has yet to win a section title, but he’s been in some very tough weight classes the last few years. That won’t change if he’s at 152, as expected, but he should be an All-State performer again. WATCH

Kyle Sams, Putnam Valley — Like teammate Mikey Bruno, Sams is a two-time section champ as he enters his junior season. His athleticism and lankiness makes him a difficult opponent for lighter weights to handle. WATCH

Garrett Semenetz, Mahopac — After beating cancer, winning on the mat is child’s play for the senior. He’s expected to remain at 99 pounds, where he won a section title last season and came within one win of placing in the top six at states. WATCH

Jordan Wallace, New Rochelle — Despite losing to Cuomo in last year’s 152-pound final, Wallace earned a wild card to states and placed sixth. The senior will make the jump to 170 pounds this season, where he should be quicker than most. WATCH

Cliffton Wang, Edgemont — Some coaches will tell you that the Harvard-bound senior represents Section 1’s best shot at a state championship this season. The three-time section champ took third in the state at 170 pounds last season. WATCH