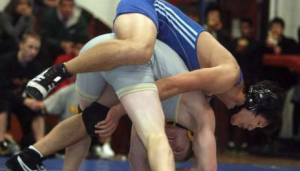 New York Wrestling News has been previewing Sections throughout the state in recent weeks.  The following discusses Section 1, Division II.

There will certainly be some changes on the way in Division II this year, as a number of longtime stars moved on.  That includes three-time NYS finalist and 2013 champion, Trey Aslanian of Edgemont, who is now competing at Princeton.  And it also includes the graduation of 10 starters from Nanuet, the three-time defending Section champions.  But with the departure of those standouts, there is room for some others to take center stage.

There aren’t any 2013 NYS placers returning, but Matt Acevedo of Pawling has been to the Times Union Center twice (at 220 in 2012 and at 285 in 2013).  He won a match in Albany in his last appearance and is looking for more.  However, it won’t be a walk in the park to get back to the state capital at either weight.

Who are some upperweight challengers?  Nanuet’s Jason Levine was sixth at the qualifier last year at 285 in his first year of wrestling, according to Edgemont head coach Peter Jacobson.

“[Levine] really impressed me,” Jacobson said. “He’s a tough kid and now that he’s had more time to get up to speed technique-wise, I wouldn’t be surprised to see him right there for a section title at 285.”

Jacobson also mentioned others he expects to excel in the higher weight classes –  Alek Pavloff of Croton-Harmon (26 wins at 220, second in the Section), Evan Shlom of Ardsley (fourth at 195) as well as Irvington’s Anthony DiNardo (close to 30 wins overall and a 1-0 loss to Acevedo at the Sectionals).

Staying in the higher classes, Chris Kim of Edgemont spent much of last season at 170 before moving up to 182 late in the year, capturing the Section title there.  He went on to the state tournament, where in his first match he took eventual fifth placer Ryan Marszal of Unatego to the limit in a 6-5 loss that went three overtimes.  Jacobson believes the experience will serve Kim well.

“Chris just had a phenomenal football season and is a tremendous athlete,” Jacobson said. “We’re not sure whether he’ll be at 182 or 195 yet, but more likely 182.  He’s really tough and able to pick things up really quickly. He was fully capable of being All-State last year, but I think the difference was experience.  Being a three-sport athlete, he doesn’t put in the time in the offseason in wrestling as many state level kids do.  I think the first time being at states in that kind of situation, his relative inexperience hurt him. But now having been there, we expect he’ll do very well this year.”

Peter Jones of Irvington will also be one to watch after his 24-victory sophomore season at 160 pounds, in which he took third at the Section 1 tournament.

Moving down in weight, Kim’s teammate Colin Hopkins had some solid victories a year ago, but didn’t get the chance to compete in the postseason.  He’ll look to make up for it with a strong 2013-14 campaign at either 145 or 152.

“Colin had placed every year in the Section since he was an eighth grader,” Jacobson said. “He was third as a freshman and second as a sophomore.  He beat [state placer and Section champion] Matt Dillon in our dual meet with Nanuet last year.  But he blew out his elbow in late January and missed Sectionals.  He’s not only talented, but wrestles year round and has made big jumps this year.  He got a lot stronger.  He’s absolutely an All-State caliber wrestler and I think his work will pay big dividends.”

Another wrestler who could be in a similar weight range this year is Chris Santana of Pawling, who earned third at 132 in the Section last year.  He won over 30 matches and had 18 pins.

“[Santana] is a brawler, a hard-nosed kid who comes to wrestle every time,” Jacobson said. “I expect him to have a great season.”

Of course, Angelo Zegarelli of Putnam Valley will be a force this year after taking the runner up spot a year ago at 160 during a 30+ win season in which he had over 25 bonus point victories.

“He’ll be the leader of their team,” Jacobson said. “[Kraemer] took fourth at the Sectionals at 145 pounds last year and is probably the most technical wrestler on their team. I think he’s capable of doing some good things.”

In the lightweights, there’s no shortage of talent.  While Trey Aslanian is now a college wrestler, his brothers Tyler and Kyle look to make their own impacts at the state level.

Tyler Aslanian was one round shy of making the podium in Albany two years ago, however, he didn’t get a return ticket in 2013 after an abbreviated campaign.  According to Jacobson, he suffered an injury in early December and missed nearly the entire season prior to Sectionals.

“When you wrestle guys who have been through the grind all season and you haven’t really competed, it’s tough,” Jacobson said. “He wasn’t where he wanted to be from a technical perspective and a timing perspective.  But I expect Tyler to be All-State this year [at 120 or 126].  He’s that caliber of wrestler and the work he’s put in and the leadership skills he’s developing are along the same lines of All-State wrestlers I’ve coached in the past.”

Like Tyler, Kyle Aslanian notched second in the Section last season.  This time, he’ll be at 106 or 113 and will look to get his first taste of the state tournament.

“The biggest thing holding Kyle back last year was that he wasn’t as confident as he could have been in his go-to offense,” Jacobson said. “We’ve focused a lot on being more aggressive on his feet and I think we’ll see that.  I think he’ll create scrambles when he needs to and he’ll use his athleticism to his advantage.”

The Aslanians will be a good one-two punch for Edgemont early in the lineup.  Similarly, Pleasantville will also have some high quality grapplers in the lower weights, including returning state qualifiers James Bathon and Stephen Paternostro.

“They are both very impressive,” Jacobson said. “Paternostro is such a physical kid.  He hit an awesome high crotch and put his opponent on his back in the Section finals for a very quick pin.  I’m not sure anyone short of Paternostro and his coaches saw that coming. I think they’ve both developed really well and will be really, really tough this year.”

The wrestler Paternostro defeated for Section gold last year, AJ Mirabal of Putnam Valley, will be back as well.  After picking up 38 victories (and 24 pins) as a junior, he’ll be looking to wear the Section 1 singlet in Albany.

Speaking of Albany, Mirabal’s teammate Noah Kelvas wrestled there in February (and won a match) after nabbing the 106-pound Section 1 crown in 2013 during a 35-win campaign.

Like Kelvas, Joe Dillon of Nanuet has represented Section 1 at the state tournament during his career.  In 2011, Dillon competed at 96 pounds in the state capital.  He has come close to returning the past two seasons, but hasn’t quite gotten over the hump.  Last year he was 32-6 and took third at the Sectionals at 126. Can he make the trip to the Times Union Center again as a senior?

“Joe Dillon is a very good wrestler who has the experience at the state level,” Jacobson said. “It always depends on where people certify and wind up, but I think his chances of winning Sectionals this year are very, very good.”

Dillon’s Section 1 title came in his freshman campaign.  Another wrestler looking for gold as a ninth grader is his teammate Dylan Mateo, who was third at 106 last year.

And like Dillon, Andrew Barsuch of Croton-Harmon is a senior wanting to make his final scholastic season a memorable one after a 37-4 showing as a junior, which included a runner up finish at the state qualifier.

“Barsuch has a lot of experience,” Jacobson said. “He’s always been right there, but just a little short.  I don’t know him personally, but he strikes me as the type of senior who is really hungry after knocking on the door for so long.  I wouldn’t be surprised to see him break through.”

Nanuet has ruled the Section in the recent past, grabbing three consecutive titles.  However, the significant graduation losses will create a window of opportunity for some other squads.

One of those is Putnam Valley, the runner up a year ago.

“I think Putnam Valley is definitely a contender, if not the favorite,” Jacobson said.  “They are very well coached – Will Carano always does a great job of developing his kids.  They have established wrestlers like Noah Kelvas, Angelo Zegarelli and AJ Mirabal.  And then they have a smattering of young guys who placed in the third, fourth and fifth range who will do really well also.”

That “smattering” includes competitors such as Mike Bruno (third at 99 at Sectionals last year), Jared Eliopoulous (fourth at 106), Willie Messinger (fifth at 160) and Dan Kelly (fifth at 182).

Another threat is Pleasantville, led by the previously mentioned returning Section 1 champions Stephen Paternostro and James Bathon.  But it’s the squad’s depth that Jacobson emphasized.

“Pleasantville had a lot of kids who were third to sixth in the Section last year,” Jacobson said. “Last year they were stronger than the year before and I expect this year, they’ll be even stronger.  Because of the balance of their lineup, you have to put them in the mix and I believe they’re right there with anyone.”

Some of those others to watch include Steven Montes, Brandon Castro and Thomas Marrone (third at 152).

A year ago, Jacobson’s Edgemont squad nabbed third.   With Chris Kim, Colin Hopkins and theAslanian brothers as well as wrestlers who have seen significant mat time such as Will Graybeal, Sam Klein and Max Worobow, the Panthers should certainly be in the thick of things come February.

“We have some experienced wrestlers and also some younger kids who we think can come in and accomplish a lot more this year,” Jacobson said.

And while Nanuet will send many fresh faces on the mat, no one is counting the Golden Knights out.

“Nanuet has been and will continue to be a strong program, even with all of the guys they lost,” Jacobson said. “I’m sure they will have more than capable guys to step in and fill those holes.  They always have a solid stable of athletes and a good feeder system, as well as great tradition.  They always seem to have one or two new names every year who come in and place high in the section.”

In addition to the wrestlers mentioned earlier such as Joe Dillon and Dylan Mateo, there are others who will make their presence felt.  That includes Eric Boyle and Chris Lowery, both fourth at the state qualifier a year ago as well as Frank Paratore, who took fifth at 152.  Another name mentioned wasAlex Slaybaugh, who could be in the mix to make the medal stand in the Section. Vinny Skokos, who had a stellar ninth grade season in 2011-12 when he won over 30 matches, including one in Albany, didn’t take the mat last year.  He could be a difference maker if he’s in the lineup.

So, will it be a four-peat for Nanuet?  Or a new team at the head of the class?

“I think a number of teams could win,” Jacobson said.  “It seems that injuries often play a tremendous role and keeping teams fresh is important.  It often doesn’t come down to the big guns; it’s the other kids getting points on the backside, getting those third-fourth-fifth place finishes that really lift the team.  It should be a good race this year.”