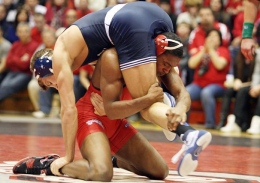 From The Lantern.
By Ethan Day

Prior to this semester, whenever I said that, I actually meant that I loved baseball, basketball and football. Growing up, all I ever played or watched on TV were those three. I tended to cast all the “lesser” sports like hockey and soccer aside. They bored me.

But that’s only because I never gave them a chance. I never understood them.

Like the majority of sports enthusiasts, I followed the most popular ones, indulging anything and everything I could about them. I understood their ins and outs. The more knowledgeable I became, the more I enjoyed the sport. So it’s by no coincidence that my favorite sport happens to be baseball because I comprehend it the best.

When I decided that I wanted to be a sports journalist late in my freshman year, I had dreams of one day writing about the “big three” athletic events. Never did I envision reporting on a sport I hadn‘t the slightest clue about. I just had the gut feeling that I’d hate it. Who likes to write about things they have no interest in? Certainly not this guy.

That’s when it happened.

At the beginning of this semester, I walked into the Lantern class as a sports reporter for the first time. I was psyched. I had the pre-conceived notion that I was going to be writing about Ohio State football, basketball and baseball (I did end up covering two out of the three, however. Not bad). But when I saw which beat I was assigned to, my heart sank.

Other than the fact that it involved two guys rolling around on a mat, I knew next to nothing about the sport. I was having a mini panic attack. How was I going to write about something that I knew as much about as knitting a sweater? My first story was due in a couple of days and I honestly didn’t know how I was going to do it.

Fortunately, I had confidence in my ability to learn enough about wrestling in a short period of time to be able to write a passable story. I literally Google-searched “wrestling for dummies” to soak up as much information as I could. How embarrassing.

I read about the fundamentals, from the different positions to all the different types of moves a wrestler could make to gain points. I read about how the scoring works, that every move had a consequence, awarding points to either the wrestler who committed the move or to his opponent. I had heard the terms before, but I never knew what they actually meant until now.

This was a complex sport.

The first story I was assigned was about reigning 133-pound NCCA champion Logan Stieber’s injury update. I thought to myself, “My first time doing some actual sports reporting and I get to interview a national champion? This might actually be pretty cool after all.”

When I walked into the Steelwood Athletic Training Facility for the first time to conduct interviews with the OSU wrestling team, I really didn’t know what to expect. I arrived at the tail end of the team’s practice and the wrestlers were paired off, grappling with one another. The way they countered each other’s moves and maneuvered to gain a better position, it was almost like an art. It was entrancing.

After practice, coach Tom Ryan, Stieber, redshirt sophomore Josh Demas and freshman Mark Martin all talked to me and to my surprise, were all down-to-earth guys. They gained a lot of respect with me for that.

As my visits to Steelwood increased and as I acquired more insight on the sport through research and observation, my appreciation for wrestling began to build.

But it wasn’t until I attended the home meet against Penn State back on Feb. 10 that I gained a true appreciation for the sport. More than 6,000 screaming fans created an atmosphere in St. John Arena that I could only compare to a big-time basketball or football game. It was so intense. I never would have guessed that a sport such as wrestling could be so exciting.

After back-to-back pins by Stieber and his younger brother, Hunter, in the second and third bouts of the meet, the crowd erupted in applause.

Then I thought to myself, wait, this is wrestling. I like basketball this time of year. I’m not supposed to like this, right? Wrong.

Although the Buckeyes ended up losing the match, 29-18, I could see how much hard work these guys put in it. They battled the entire match and that really resonated with me.

I never expected to like wrestling, but boy, I’m glad that I had the opportunity to cover it. As the cliché phrase states, “You’ll never know if you like something until you try it.” Well, I tried it, and I liked it.

So now, when I say I love sports, wrestling belongs on that short list right next to baseball, basketball and football.