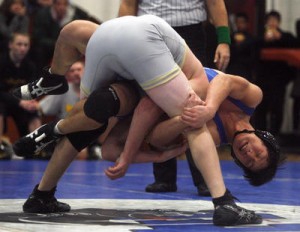 As promised, I’ve put together another version of the look ahead series to cover the outlook in Division 2 for next season. I covered D1 last week, but this one may have been even more difficult. Nanuet was an easy choice in year’s past, but the three-time champs won’t be as dominant next season. In my eyes, I see four teams that should be vying for a section title depending on how the cards fall.

It’s pretty much the same drill as what I did for D1, with a few slight changes. I’ve listed each of the teams that I see in the top five next year, plus a few more that are on the fringe. I’ll give you the names of all of the returning wrestlers from each team who qualified for sectionals, and also those who qualified and will be graduating. One star (*) next to wrestler’s name indicates that he was all-Section this past season (meaning he was a section finalist), two stars (**) signifies that he qualified for states and three stars (***) means that he placed at states. The year listed next to each wrestler is what they were this season.

1. Putnam Valley
Key returners – Mikey Bruno, 7th; Noah Kelvas, Fr.** (pictured to the right); Jared Eliopoulous, 8th; AJ Mirabal, Jr.*; Sam Honors, Soph.; Angelo Zegarelli, Jr.*; Willie Messinger, Soph.; Dan Kelly, Jr.
Key losses – Chris Bruno**; Kyle Kelvas*; John Messinger***
Thoughts – While the past few seasons have been pretty easy to pick in D2, that will not be the case next year. There are four teams that you could argue should enter the season as the favorite, and I think it will ultimately come down to which team stays the healthiest and is able to get contributions from some young up-and-comers. But strictly looking at the guys who qualified for sectionals last season, my best guess at this point is that the Tigers will come out on top. Recent history suggests that next season could be Put Valley’s year. After taking third two seasons ago, PV finished second this past season, so they are trending upwards. Coach Will Carano has built an excellent program which, despite losing two state qualifiers, seems like it will have enough depth to compete for a title now that the Nanuet dynasty is being hit hard by graduation. Kelvas returns with a title to defend, while Mirabal and Zegarelli could make it three champs after reaching the finals last month. The Tigers have five other guys coming back who placed, which bodes well for their chances.

2. Pleasantville
Key returners – James Bathon, Fr.**; Steven Montes, Soph.; Stephen Paternostro, Jr.**; Brandon Castro, Soph.; Tom Marrone, Soph.; Omeed Ansari, Fr.; Frank Tirri, Soph.
Key losses – Mark Taino; Peter Salzarulo*
Thoughts – While we all pretty much knew who the top three would be at sectionals this past season, the team that may have been the most pleasant surprise was the Panthers. Pleasantville finished fourth, and will bring back the majority of its team for a run at the top three – and maybe even a section title – next season. Bathon and Paternostro each pulled off huge upsets to earn their first titles, and both will return to lead the charge. But five others who placed also return, and none will be older than a junior. The Panthers were the last team to win a title before Nanuet went on its run of three straight, and after a couple of down years, they appear to be back on the right track to compete for first once again.

3. Edgemont [*see below for edit]
Key returners – Kyle Aslanian, Fr.*; Tyler Aslanian, Jr.*; Max Worobow, Fr.; Sam Klein, Jr.; Will Graybeal, Jr.; Colin Hopkins, Jr.; Chris Kim, Jr.** (pictured to the left)
Key losses – Trey Aslanian***; Sky Korek; Jack McCormack*; Ross Kantor; Jason Worobow*
Thoughts – It will be a new era for the Panthers with state champ Trey Aslanian and so many other key seniors gone, but there is still enough talent here to be in the mix for a title. Both of Trey’s younger brothers, Tyler and Kyle, are coming off of disappointing losses in the section finals, so you can be sure they’ll be on a mission next season. Kim comes back as a defending champ to give Edgemont three guys who look like good bets to make it to Albany, which is a good place to start. They’ll ensure that the Panthers remain in contention, but the key will be how they develop contributors around those three.

4. Nanuet
Key returners – Dylan Mateo, 8th; Eric Boyle, Soph.; Joe Dillon, Jr.; Chris Lowery, Soph.; Frank Paratore, Jr.; Jason Levine, Jr.
Key losses – Anthony Calvano***; Billy Thompson; Jon Spiegel; Matt Dillon***; Jazz Saraguro; Alex Johns; Peter Smith*; Mike Buhlmann; Kevin Brundage; Dan Breit***
Thoughts – No team in D2 loses more than the Golden Knights heading into next season, but I still wouldn’t count them out for a four-peat. Section 1 coach of the year Carmine Serra has developed a tradition of excellence here that won’t simply walk out with this senior class. With all of that being said, Nanuet will certainly need to replace some major pieces, most notably three state-place finishers in Breit, Calvano and Dillon. Losing those three is a huge blow, but there are many other seniors who are leaving that were major parts of this team – 10 in all – who made up two-thirds of the Nanuet lineup. This will be Joe Dillon’s team now, but a wild card could be Vinny Skokos. He won a section title as a freshman before not wrestling this past season. If he returns to form, he could provide a major points boost, but for the purpose of this exercise, I only include guys who were on the team this past season.

5. Pawling
Key returners – Dan Fraad, Jr.; Chris Santana, Soph.; Zach Martin, Jr.; Ed Foster, Jr.; Matt Acevedo, Jr.** (pictured to the right)
Key losses – Tyler Smith
Thoughts – This fifth spot really looks up for grabs between about five teams, but none of those teams lose as little as the Tigers. With only one section qualifier graduating from a team that finished just eight points out of fifth place, I like Pawling’s chances to make a jump next season. Acevedo returns as a two-time section champ, while Santana looks like a section champ in the making. Three others return who placed in the top four, so the Tigers are looking at a team that could have about five guys place third or better next season. That would probably add up to a top five finish overall.

On the fringe – Croton-Harmon, Irvington, Westlake

As I did with D1, I’ve come up with a list of the top 10 wrestlers with a chance to do damage at states next season and a rough estimate of who the favorites should be in each weight class. D2 is in a unique situation because not a single guy who placed at states is returning, which indicates it could be an uphill climb in Albany next year. Only two guys are coming back who even won a match at states a few weeks ago—Kelvas and Acevedo—and only Acevedo is a two-time section champ. There will need to be some major improvements for Section 1 to even think about a top five finish in the state next year in D2.

EDIT, MARCH 12: For some reason (probably because he was out for sectionals), I mistakenly listed Edgemont’s Colin Hopkins as a senior. He’s actually a junior, and if he were to win a title, would seriously boost the Panthers’ chances to finish first. I added him and left the order as is for now, but I think this is going to be close enough to where one guy could make a big difference.

File photos from The Journal News