The new Open Division awards are designed to serve to recognize the high school and club programs that used graphics, video and social media the most effectively to build their brand.

The Gold Standard award is considered the highest honor in the Best of Brand awards and recognizes the program that had the strongest presence on social media throughout the year. It considers both the content and messaging produced by a program, in addition to recognizing the number of followers a program has and how they interact with them. 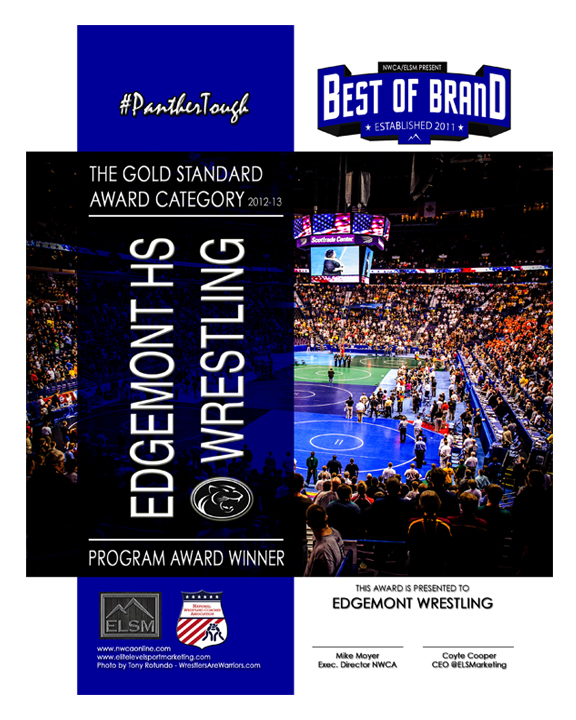 The 2012-13 winner of the Gold Standard award in the Open Division was Edgemont High School, located in New York. The Edgemont Panthers claimed the award due to their successful well-rounded efforts on a variety of online mediums.

In addition to a solid website, blog and Twitter Presence, the Panthers differentiated through their consistent branding efforts on Facebook. Edgemont High School’s page, Edgemont Panthers Wrestling, had more than 300 likes and detailed the day-to-day activities of the program, posted event-related information and provided historical factoids dating back to the creation of the program.

“Being honored with the Best of Brand Gold Standard award is a tremendous accomplishment for our program,” said head coach Pete Jacobson. “Our coaching staff, athletes and parents all really bought in to our Panther Tough mantra. It not only benefitted our marketing efforts but also our whole program’s culture! We can’t wait to step up our game next year!”

The Added Value Video Best of Brand Award, which serves to recognize programs who produce a video that builds its brand in a unique manner, was awarded to Chattahoochee. They emerged from a competitive category that featured five strong finalists.

Chattahoochee earned the top spot with a combination of a high impact video effectively featuring their student-athletes and a strong online voting presence. The winning video can be accessed on the NWCA “Added Value” award page.

Warren Central High School captured the Better than Good Graphics Best of Brand Award, an award that recognizes the program with the best branded graphic that engages fans via the internet and social media.

Warren Central emerged as the winner in the category with a combination of strong graphics and a unified “Strong Links Make a Strong Chain” mantra. They edged out the Young Guns Wrestling Club in a close race. The winning submission can be accessed on the NWCA “Better Than Good Graphics” award page.

The Best of Brand Awards were founded by Elite Level Sport Marketing CEO Coyte Cooper following the 2011-2012 season, and after a widely successful inaugural year returned for a second year.

For more information on the Best of Brand Awards and past winners visit the NWCA website at http://www.nwcaonline.com/nwcawebsite/best-of-brand-awards.

About National Wrestling Coaches Association (NWCA)
The National Wrestling Coaches Association, established in 1928, is a non-profit organization for the advancement of all levels of the sport of wrestling with primary emphasis on developing coaches who work in academic environments. The membership embraces all people interested in amateur wrestling. The three core competencies of the NWCA are: coaching development, student-athlete welfare, and promotion of wrestling.