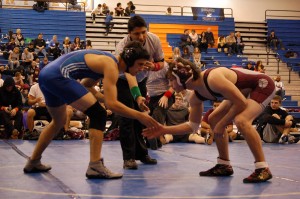 This past weekend was the beginning of a long season of competitions for the Edgemont Panthers.  The Tony Carlucci Duals opened Friday as the Panthers took on Croton, New Rochelle, and Fox Lane.  The Panthers’ intensity was high as they took care of Croton by a dual meet score of 60-18, a 57-9 win over New Rochelle, and a close loss to the hands of Fox Lane after a couple misconduct points from the Panthers put them behind 38-37.

On Saturday, the Panthers began the day with a win over Eastchester, with a dual meet score of 59-27.  The Panthers then faced  Harrison and Mamaroneck, with losses of 34-33 and 46-37, respectively.

With the season as young as it is, there is plenty to improve upon but overall, Coach Jacobson had a positive outlook about what he and the coaching staff saw from the Panthers over the weekend.

“This was a great first weekend of competition for us. Our guys were focused, our conditioning was great for this time of year and our technical skills were where they need to be for early December. The experience of our line-up really showed and our guys wrestled some hard-nosed bouts against some good competition.”

“For us, this time of the year is about improving in all aspects: our conditioning, our mental and physical preparation, and our technical and tactical execution,” explained Coach Jacobson. “We want our guys to wrestle hard and aggressively and we want to use these early competitions to help expose weaknesses and learn where we need to focus in the wrestling room on an ongoing basis.”

The coaching staff like what they saw from the older, more accomplished members of the team.  Said Coach Jacobson, “Our upper-classmen were physical, aggressive and really set the tone for this season.”

There was no question some of the more experienced Panthers have started the season on the right foot.  The Aslanian brothers, Trey, Tyler, and Kyle were all but flawless during the tournament.  Kyle, wrestling at 99 lbs, finished with a 6-0 record with 3 pins and a tech fall. Princeton-bound Trey, battling at the 120 lb weight class, was also undefeated with a 6-0 record, 4 pins, and a tech fall.  Tyler, weighing in at 113 lbs, was a more than respectable 5-1 with a pin, a tech fall, and a MD.  His only loss was a 2-0 decision against New Rochelle’s  All-State wrestler Nick Barbaria.

Some other highlights of the weekend came from Jason Worobow, who also went 6-0. He had two pins and a MD, but no match was more thrilling than his double overtime victory over Harrison Steins of Harrison HS.  Oliver Oks, who actually weighs 171 but was bumped to the 195 lb class, excelled and finished with a perfect 6-0 weekend, with 4 pins.  The only points he gave up were when he was intentionally cutting his opponents in order to take them down again.

Scores like these are expected from the experienced Panther wrestlers, but Coach Jacobson liked what he saw from the rest of the group as well, especially from those with less experience. Coach Jacobson cited 8th grader Clifton Wang, sophomore Jon Fleischmann, and juniors Riki Mistry and Marc Ficuciello as promising underclassmen who fit this description.

“We were particularly impressed with the attitude and focus of some of our starters with less varsity experience.  These guys really demonstrated how they’ve bought into our philosophy and each wrestled fearlessly – they really battled every time they stepped on the mat.”

“We’re working with each to fine tune their individual styles and help them further develop to the next level. We got a lot of good film and notes on each of them this weekend to help in this regard.”

The coaching staff and the Panthers will head back to the practice mats this week and take those notes and film from the first weekend of competitions to heart as they prepare for the competitions in the incoming weeks.