Dan Kornberg was sitting in class when his phone started vibrating repeatedly.

He ignored the calls. But he did not ignore the text message:

THE DOCTOR NEEDS TO SEE YOU! 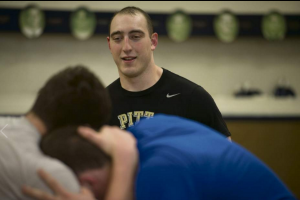 “I want you to look at this,” the doctor said shortly after, holding up an MRI of Kornberg’s right knee. “There’s an anomaly here. I don’t know what it is. And I don’t like it.”

A few days before, Dan Kornberg, who in 2013 was a wrestler at the University of Pittsburgh, felt a “weird feeling” in his knee halfway through practice.

He didn’t tell anyone at first. “I just kept pushing,” Kornberg recalled. “There’s nothing you can’t wrestle through.”

After practice, though, he told a trainer. Medical staff examined him: Slightly torn meniscus, they decided. No big deal, maybe a month of rehab. But they ordered an MRI, just to be sure.

Then the doctor summoned him to his office.

The MRI did indeed reveal an injury to the meniscus, just as trainers suspected. But it also detected a small, mysterious mass. They figured it was nothing serious, perhaps some residual sign of trauma from years of wrestling. Kornberg wasn’t worried. He was more concerned about missing the rest of the wrestling season — until the doctor mentioned cancer. 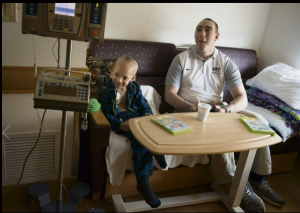 “I don’t want to rule anything out,” he said and ordered a biopsy.

“I started to get little bit anxious,” Kornberg recalled. “Stupid me decided to go to Google, because I really didn’t know you could get a cancerous mass in your knee region. I found that it’s rare, but it could happen.”

Kornberg was in class when his phone vibrated again. This time he took the call.

The bad news: The mass in his knee was Ewing’s sarcoma, a rare bone disease typically found in children.

The good news: They caught it before it could enter the lungs, which is often when symptoms of Ewing’s sarcoma appear. By then, the doctor said, it’s usually too late.

“I lucked out with the timing,” Kornberg said.

He lucked out because he hurt his knee. Specifically, his right knee. Had he injured his other knee, who knows when doctors would have found the cancer? 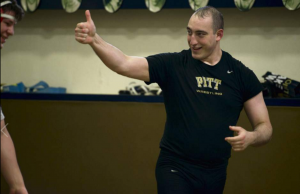 Pitt junior Dan Kornberg, 22, gives the thumbs up while working with high school wrestlers during a Pittsburgh wrestling club practice at the Fitzgerald Field House in Oakland Wednesday, May 18, 2016. Jasmine Goldband | Tribune-Review

Chemotherapy started at once and lasted for nine months. The doses were aggressive, and they worked. The mass shrank. Surgeons removed it.

Kornberg has been cancer-free for 21 months.

Today he is back with the wrestling team as a team manager. Ongoing treatment means he can’t compete. So he contributes in ways wins and losses cannot define.

“When guys think about what they’re going through — a hard workout, making weight, a tough loss — they say, ‘If Dan can beat cancer, we can do whatever we have to do,’ ” said Matt Kocher, head assistant coach for the Pitt wrestling team.

For Kocher, the diagnosis was a frightening reminder of his wrestling days at Pitt, when teammate and friend Kyle D. Deliere was diagnosed with Ewing’s sarcoma. Deliere, a former WPIAL wrestling champion at Canon-McMillan, lost his battle. He died Nov. 15, 2013, at 27.

“Dan was probably the least concerned of all of us,” Kocher said. “He kind of treated it like it was just a regular old knee injury, even though we all knew it was much bigger. That’s Dan. He might be the most positive kid we’ve ever had come through the program.” 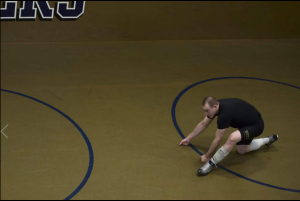 Positivity is the key, Kornberg said.

“If you start giving up mentally,” he said, “your body is going to follow.”

That’s what he tells the kids in the hematology/oncology unit at Children’s Hospital, where Kornberg volunteers every Friday.

“For these kids to be going through this is extremely hard,” he said. “They want to take their minds off it. They want someone to talk to them who’s not a parent or a doctor. I can lighten the mood and distract them for a bit and get them to realize everything will be OK in the long run. I love doing it. I understand what they’re going through.