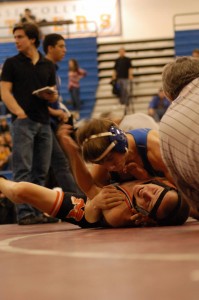 Over the weekend, Trey Aslanian become the single leader of wins all-time for Edgemont High School Wrestling. He currently has 155.

It is not every year that a record is broken.  At Edgemont High School, the all-time wrestling wins record was set by Anthony DeMaio in 1992 when he finished his tenure at the school with 130 career wins.  That record was upheld for 17 years until Genta Murayama surpassed that achievement in 2009 with 150 wins of his own.

The wait for another wrestler to come along and exceed that number of wins was not as long this time, as senior Trey Aslanian tied and created his own record this past weekend at the Center Moriches Tournament.

These matches ended in a manner that Edgemont Wrestling fans have come accustomed to, as Trey finished with 7 pins and 2 forfeit victories.

This was not just a 4 year campaign that lead to a new record holder, however.  As Coach Jacobson observed,  “Trey’s milestone this weekend is a testament to the consistent hard work he has put in for many years.  An accomplishment of this magnitude is obviously not something that happens overnight and is really unique because it shows a commitment that dates back to 4th grade to become the best he can be.”

“For a student-athlete to show that kind of dedication spanning back so far really demonstrates how special Trey is.”

Trey, who will be representing the Princeton Tigers next season, understands that this accomplishment is simply a result of the goals he sets every season, and his senior year is not over yet.  “It’s one of those records that you can never really appreciate in the moment.  I’m sure I’ll appreciate it more when I look back on my career as a whole.  The only record I focus on is being the first State Champ to be honest.”

Trey acknowledges, “It’s definitely satisfying to set an all time record in something, especially when I have had so many great wrestlers come before me.”

With all the respect he has for the past, you can tell he feels his reign as record holder may be fleeting.  After all, he does have two younger brothers on the team.  Tyler is a junior and his youngest brother on the team, Kyle, is a freshman.

“I probably should enjoy it while I can though because Kyle is going to shatter my record when it’s all said and done.”