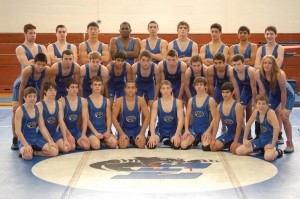 The Panthers relied on their entire line-up to bring home the 31st Annual Edgemont Tournament title.

It came down to the championship finals on Saturday night but Edgemont sealed its victory by a five-point margin over Pearl River to win its second consecutive Edgemont Wrestling Tournament title.

The 31st Annual Edgemont Wrestling Tournament featured almost 250 wrestlers from 19 teams from Section 1 Large Schools, Small Schools, Section 9, Section 11, Catholics, Privates and Connecticut. When the dust settled Edgemont remained tournament champions. “The most telling thing about the tournament was not the fact that we won, but the way in which we won,” said Head Coach Pete Jacobson.

“This was really a full team effort with contributions throughout our line-up and a lot of our young guys really stepping up.”

“To be missing those guys and the number of points they are usually responsible for certainly put us in an underdog position on paper. The fact is though, we  wrestle a very tough schedule by design so a lot of our athletes’ win-loss records don’t accurately reflect just how good they really are. We tend to be chronically under-seeded but we also consistently outperform those seeds,” Jacobson explained.

Full results can be found here.

Edgemont returns to action this Friday to take on rival Scarsdale Raiders in the annual Bronx River Cup. Wrestling starts at 6:00 PM at Scarsdale High School.