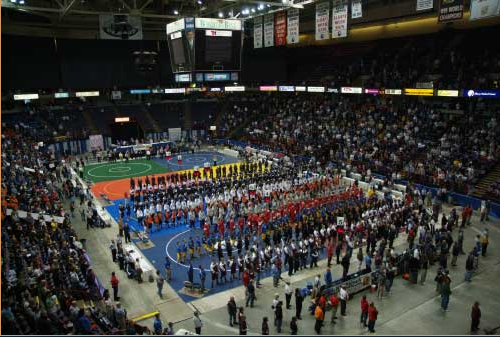 LATHAM, NY – The New York State Public High School Athletic Association has announced tickets are now on sale for the 2013 High School Wrestling State Championships at the Times Union Center on Friday, February 22nd and Saturday, February 23rd. The Association has also released its official competition schedule for the upcoming tournament which is sponsored in part by the US Navy, Worldwide Sport Supply, Jostens, CSEA, MaxPreps, and the American Dairy Association.

THE 2013 SCHEDULE is as follows (more tournament information can be found at www.nysphsaawrestling.com or www.nysphsaa.org):

THE 2013 TOURNAMENT, now in its 10th year of a two-division format, will follow a similar schedule to last year’s event held at the Times Union Center. This year will mark the sixth year an additional 120 wrestlers will fill the byes in the brackets bringing the total number of participants to nearly 500. Qualifiers will hail from the 11 NYSPHSAA sections, as well as from the Public Schools Athletic League (PSAL) of New York City and the Catholic High School Athletic Association (CHSAA).

TICKETS ARE ON SALE today at the Times Union Center Box Office, select Wal Mart locations, charge-by-phone at 1-800-745-3000, or online at www.timesunion.com.

TO REQUEST A MEDIA CREDENTIAL for this event, please contact Chadd Ryan, Marketing Manager at the Times Union Center, via e-mail at: chadd.ryan@timesunioncenter-albany.com. Media members will be asked to provide a photo ID prior to receiving their credential at the media table during the tournament. Regardless of having secured an official NYSPHSAA tournament credential, this venue REQUIRES ALL MEDIA to contact the arena to request a credential and announce their attendance. On February 20th, all credential requests will be reviewed and approved.

SPONSOR OPPORTUNITIES for the 2013 tournament are still available and all inquiries can be directed to Joe Altieri at altieri@nysphsaa.org.