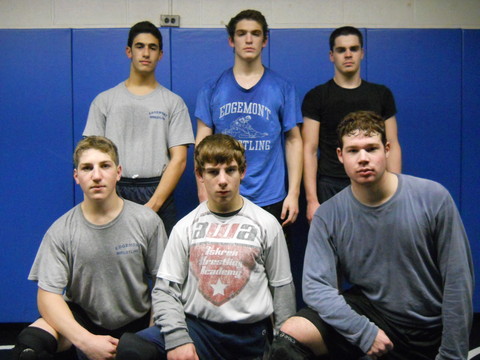 EDGEMONT, N.Y. – The Edgemont varsity wrestling team has had enough of finishing second in the Section 1 Division II Wrestling Championships. Runners-up the past two years, the talented Panthers are focused on winning their first sectional title in 2013.

“We are all pretty psyched up for this, especially the seniors,” said Sky Korek, himself a senior. “We’ve come so close to winning sectionals that this is the year we need to push through it and get the team title.”

With nine returning starters, there are not many positions remaining, and Edgemont can draw from a vast group of wrestlers to fill these starting spots as 27 wrestlers drilled Wednesday.

“This is a big group from last year and I think this may be the biggest group we’ve had since I’ve been on varsity,” said Korek, who is in his fourth year. “We’re all excited about the potential of the freshmen and sophomores.

“Everyone is working really hard and we can see that everyone is giving it their all.”

The seniors are serious about giving Edgemont the elusive sectional title. They met with Edgemont coach Pete Jacobson and stressed to him their determination and desire to complete this goal.

“We are really hungry and we want to win the title this year,” Korek said. “This is the seniors’ last shot.”