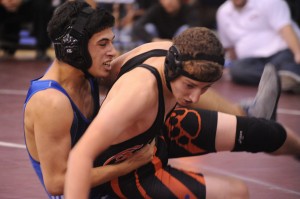 Ross Kantor ’13 kept his focus while being displaced by Hurricane Sandy.

Hurricane Sandy hit the Tri-state area hard two weeks ago, knocking out power and destroying homes.  A week later, Nor’easter Athena piled on heavy, wet snow and continued to keep people in the dark with her powerful winds.

The Scarsdale area was not spared, as many were left without power, including Edgemont High School, which was closed for six consecutive school days.

With their minicamp slated to begin on Monday, November 5th, it would appear that Sandy’s projected arrival would delay the start of the Edgemont Wrestling season.

When the worst of the storm passed, the team returned to their normal practice routines.  This, however, did not mean things had returned to normal off the mat.

One wrestler, Senior Ross Kantor, faced constant adversity when dealing with the aftermath of the storms.

“Where I live, there are so many trees, and they were falling all around,” recalls Ross.  “I had one, half the tree split and took out my whole backyard.”

Falling trees were only the first of many headaches that resulted from Sandy’s destruction. “Luckily for the first couple days we had a generator, which powered our fridge, and a sump pump in case there was flooding.  And that was fine for the first few days, but then it got way too cold.”

When the worst that Sandy had to offer finally passed, it was time to assess the damage.  “I drove around with my brother for a little bit, but you couldn’t get around.  Every other street you turned on there was a tree blocking it, or a police car there, it was chaos.”

Ross knew there was a possibility he may still have school, or he at least wanted to stay close to home for training purposes, but this was no longer an option.  “I had to make the commute from my Grandma’s house in Rye Brook.”

Ross and his family were without power for ten days.

“It was rolling with the punches, making the best of it.  I was still able to get a few lifts in.”

Ross kept to a consistent routine, alternating his workouts between the local CrossFit gym and the wrestling club in Scarsdale.

“When you’re sitting in your house for such a long time before the season, it can put a damper on your fitness,” Ross admitted. “Getting those workouts in was good, it took away a lot of the stress I was dealing with.”

Although the storm disrupted his normal life and preseason routine, Ross kept his focus on what is most important.

“In a big disaster, you want to be with your family, I think that’s important.  My Mom’s birthday happened during this.  We didn’t have our usual dinner, but we did what we could.”

One storm has passed and now another hurtle stands in the way of Ross Kantor and the rest of the Edgemont Wrestlers.  There are fifteen uninterrupted practices standing between the Panthers and the start of this season’s competitions.  The Panthers are driven and focused on developing their fundamentals and preparing for the upcoming season, and no natural disaster can stand in the way of their ultimate goal of becoming state champions.