We got about two dozen emails asking for more about the States this past weekend, so here ya go! 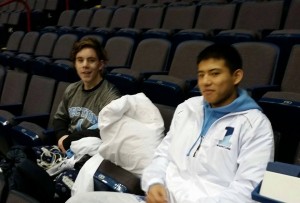 Kyle and Cliff hydrating and fueling after weigh-ins.

Kyle Aslanian (132 lbs)
Kyle ended his HS career like a warrior. After getting the wildcard bid to States a few days after Sectionals, Kyle jumped right back into his training with a new focus and a terrific work ethic. He definitely made improvements which is rare to see in the short period between Sectionals and States.

In Kyle’s 1st match, he took on 5th-seeded Tyler Lapiene of Ogdensburg. Lapiene is a former All-State wrestler and a game opponent. He got off to an early lead on Kyle and took a 4-0 lead into the 3rd period. Knowing where Kyle is strong and having scouted Lapiene, we took top and Kyle went to work. He was able to turn Lapiene twice to take a 6-4 lead and win the bout. You can check it out for yourself right here! 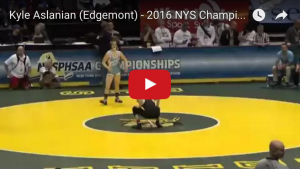 In the quarter’s Kyle wrestled Brandon Gould of Watkins Glen. Gould’s takedown in the 1st period led to him taking a 3-1 lead into the 3rd. Kyle threw everything he had at Gould and almost scored back points in a couple of situations, but Gould managed to hold him off, scoring a reversal and backs right at the end as Kyle went for broke.

In wrestlebacks, Kyle faced Babylon’s Brett Frole. Once again, Kyle did not hold back as he worked with everything he had to score on Frole. Frole scored the winning takedown in an out-of-bounds situation that involved Kyle injuring his ankle pretty badly. Frole managed to squeak by with a 5-3 decision.

Kyle had a tremendous career here at Edgemont that saw him achieve All-State Honors, over 100 career victories and reaching the Sectional Finals four times. He has been a great leader of our program and will be sorely missed next year as he looks to continue his wrestling career at NYU.

Cliffton Wang (170 lbs)
Cliff opened up his tournament against Locust Valley’s John Pendranghelu. After giving up the first takedown. Cliff came alive and stormed back to win an 11-2 major decision.

In the quarters, he saw a familiar foe in Schulerville’s Tyler Green. Cliff and Green wrestled twice at this year’s Eastern States Classic. They had split results at Eastern States with Cliff winning the first bout and Green getting the victory when they met again in the 7th place bout.

This match ended in what we thought was a 7-6 decision for Cliff. The ref raised his hand. The assistant ref then pointed out a scoring error and that resulted in them declaring a tie and forcing OT. This was about a minute or two after they had raised Cliff’s hand. I think this unexpected shake-up caught Cliff understandably off-guard and he lost in sudden victory OT.

Despite the controversial loss, Cliff pulled himself together really well. He won 1 more match that night with a 1:40 fall over Cambell-Savona’s Geoff Hargrave to make the 2nd day.

The first round the next morning was the blood round, where he had lost last year. The winner is guaranteed All-State, the loser goes home empty-handed. Cliff wrestled Micah Miller of Maine-Endwell.

After a scoreless 1st period, Miller took bottom right away when he won the toss and escaped about 30 seconds in. Cliff eventually got to his takedown and took bottom in the 3rd with a 2-1 lead. He managed an escape and another takedown in the 3rd to win 5-1 and secure his first career All-State Honor.

In the consi-semi’s he won a 4-2 decision over Alexander’s Matt Gaiser on the strength of a 2nd period reversal and tilt.

In his 3rd place bout, Cliff wrestled another kid who had beaten him earlier in the season, 2nd-seeded James Hoeg of Mattituck. Hoeg gets in on knee-pull singles against everyone he wrestles. That’s how he took Cliff down to beat him the first time. Hoeg managed to get in on that shot 4 times during the match and took Cliff down in the first period. Cliff escaped in the first and 2nd periods to make score 2-2.

On their feet in the 3rd period, Cliff showed great composure and defended all of Hoeg’s attacks. Cliff got to his own takedown coming off of a lefty boot-scoot with 3 seconds left to win the match and take 3rd in NYS! 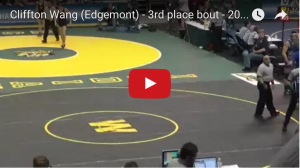 Last, but not least, here’s Cliff on the podium! 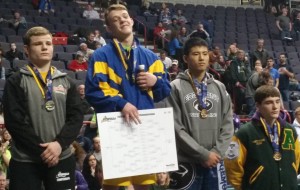 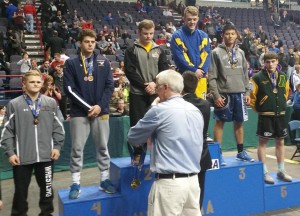 Stay tuned, guys. We have a bunch more cool insider videos coming at you in the next few weeks to thank you for being so awesome and supportive this season!