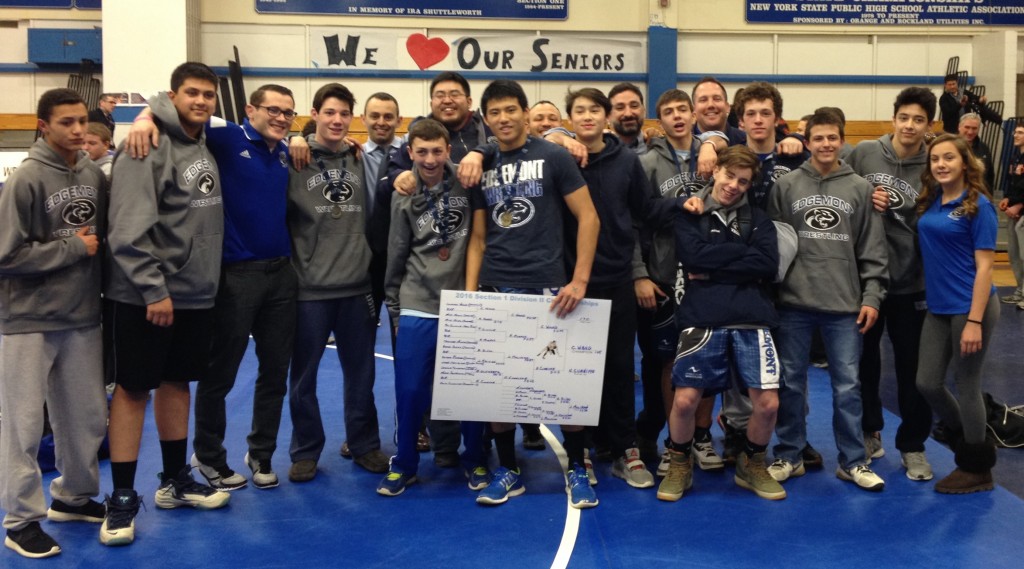 So – I’ve got to apologize for taking so long to send this update out… The Sectionals are always such a physically and emotionally draining weekend, it’s hard to sit down and get my thoughts into words.

After catching up on some loose ends, putting in some shifts at my “real job” (I’ve gotta pay my mortgage), and starting the process of preparing for the State Championships, I’m finally able to sit here and write to you… In fact I’m on the bus up to State Team practice right now!

I’ve said it before and I’ll say it again – this year’s team is certainly not the largest we’ve had and probably not the most talented, but I’d put them up against any other team in terms of work ethic, heart and grit.

Those qualities shined through crystal clear at the Sectional Championships.

I couldn’t be prouder of the way our guys battled against every opponent!

But all that really doesn’t tell the story of our tournament, so read on…

113 – Andy Williams went 2-2 at the tournament. He’ll tell you that’s a huge disappointment. I’ll tell you that due to his own hard work and effort, Andy has improved more than almost any wrestler on our team from last year to this year. This is the number one criteria on which we evaluate our wrestlers – if you keep getting better the winning becomes inevitable. We’re looking for a strong off-season from Andy and an even stronger senior campaign.

120 – Nick Meglino also showed some tremendous heart. In his first round match he got headlocked to his back, he spent what seemed like an eternity fighting from here and absolutely refused to be pinned. He rallied back from there to win a 19-6 major decision. In the quarters, he took the number 1 seed into the 3rd period only yielding the narrowest of margins to him. He rattled off two more wins before finally upsetting his way to a 5th place finish as freshman! Can’t wait to see the gains Nick makes next year!

126 – George Mellor is another wrestler who exceeded expectations this season (at least those of people outside of our program!). The exciting thing about George is you could literally see him get better every time he stepped on the mat. George really came into his own this season, in terms of his style and his belief in himself. We no longer have to keep reminding him of how good he really is! Most impressive this tournament was how he took it to his semi-finals opponent – a tough, athletic wrestler who beat him earlier in the season and then went after his opponent in the finals. While George finished as a runner-up, he is a clear threat to win a title next year in his senior season!

132 – What can you say about Kyle Aslanian other than he’s had a tremendous career: 4 Sectional Final appearances, All-State, over 100 career victories… Kyle dominated his way through his bracket and in the finals threw everything he had against his Putnam Valley opponent. Kyle fell short of the win but he competed hard. We have our fingers crossed he’ll be getting a wildcard to the State Championships (we should find out tonight) and will make another run at the podium in Albany. Kyle also just got news that he’ll be continuing his wrestling career at NYU, so we’ll clearly be hearing more about him in the future!

Chris Eppolito had to be one of the most inspirational wrestlers on our team this weekend. Chris came into sectionals as a senior with a less-than-stellar record, having never placed in the tournament before, but with more heart and desire than I’ve seen from almost any wrestler I’ve coached. Chris fell in the quarters to the eventual champion and found himself in wrestle backs. He needed to win twice to advance to the 2nd day’s placement rounds. He won his first match with a 0:55 pin of Irvington’s Ben Yeh and found himself in the blood round vs. 3rd-seeded Karl Burnich of Nanuet. Chris absolutely refused to lose and wrestled the best match of his career, upsetting Burnich 6-4 and advancing. In 5th place bout, Chris found himself up against a similarly strong opponent from Pearl River and came away with a 12-5 decision, ending his Edgemont career with a win and a 5th place finish in Sectionals!

138 – Zeke Cohen has consistently improved all season long. Although he’s only a second-year wrestler, he is always one of the hardest workers in our practice room. Zeke’s unorthodox style of wrestling benefits him quite a bit – more and more as he gains more mat experience – but it also still can come back to bite him sometimes. Zeke has the ability to get his opponent rolling all around the mat and has a knack for catching his opponent on his back in a lot of these situations. Unfortunately the reverse is sometimes true as well. Zeke’s two losses at Sectionals were of this variety. The good news is that in both of these matches, Zeke was wrestling extremely well, getting to his attacks and finishes, keeping great pressure on top and moving well on bottom. If Zeke stays on his current trajectory with some off-season work, there’s no doubt he’ll be on the podium next year.

Georgie Guarnieri, missed placing at the competitive 138-pound weight class by 1 win as only a sophomore. As only the 10th seed – Georgie lost to a bigger, stronger, more experienced opponent in the first round, but rallied back with a pin over Croton’s Jake Dominello, before his hard-fough 4-1 loss in the blood round. Like Zeke, Georgie pushes himself hard in practice everyday and his gains this season were noticeable. He added a lot of strength in the off-season and it showed on the mat this year. Georgie is strong in all positions without any glaring weaknesses. Put all this together and Georgie will undoubtedly be part of the core of our team next year.

145 – Hunter Moore finished 4th and wrestled a great tournament. He was thisclose to upsetting 2nd-seeded Robert DiNota of Westlake in the 3rd place bout. Hunter capped off a great senior season with a 23-11 record. He showed a lot of leadership for our team this season both on and off the mat and set a great example for our younger wrestlers with his always physical and aggressive style of wrestling. These accomplishments are even more impressive considering Hunter didn’t wrestle in 9th or 10th grade and had a losing record last year. He’ll be missed next year!

152 – Max Worobow finished his senior campaign as Sectional finalist and runner-up, netting himself All-Section honors along the way. I couldn’t be prouder of the season and career Max put together, as a terrific leader in our program and a 4-time Sectional Place Finisher. Max pinned his way into the semi’s where he took on 2nd seeded Ryan Duffy of Westlake. Max took a tie match into the 3rd period where he secured the winning takedown with 30 seconds left. It was an upset to everyone in the gym but our team. Max lost in the finals but put up a great fight – an admirable finish to a great career! Our leaders next year will have big shoes to fill.

Sophomore Maunil Kothari was also at 152 for us. Maunil does not have a lot of mat experience but straight up outworked his first opponent to get a pin and help out the team. Although he lost to his next two opponents, he gained valuable experience this year and has two more years to keep progressing.

170 – Cliffton Wang was just dominant. Not a single opponent made it out of the 1st period with him. He earned his 3rd Section Title as a junior and punched his ticket back to Albany. We expect him to do a lot of damage up at States and he’s been right back to training the past three days to make that a reality.

285 – Surmed Khan rounded out our 12 entries into the tournament. Surmed is an undersized heavyweight so every time he competes he’s up against a bigger, stronger competitor. I’m happy to report that Surmed went toe-to-toe with each kid he faced. He did not back down from anyone and did not allow himself to be pushed around – aggressively handfighting and attacking each opponent. His heart and desire shown through as he made it to the 5th place bout and took the victory in triple overtime in front of a packed gym. Surmed also has 1 more year for us and we’re confident he’ll make some more noise in the heavyweight division next year.

Top to bottom this team made more gains and showed more improvement than any team I can remember. It’s a testament to their work ethic, teamwork and ability to keep pushing each other to get better each and everyday.

Most of our returners have already had conversations with me about off-season training plans and we can’t wait to get to work after the State Championships!

More updates on States in a day or two!