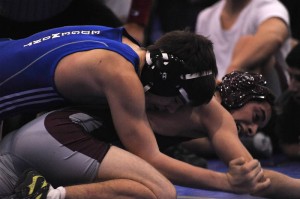 Due to the forecasted winter storm tomorrow evening, the Section 1 Championships has been postponed to a one-day Sunday tournament.

Wrestling will kick off at 9 AM Sunday at Irvington High School (40 North Broadway, Irvington, NY 10533) and will continue all day until its completion.

We hope to see our fans there – loud and dressed in blue!

The Panthers have 17 wrestlers competing for Section 1 Titles.

99 – Freshman Kyle Aslanian is the #1 seed here, he will likely face Putnam Valley’s Mikey Bruno in the semi-finals and Pleasantville’s James Bathon in the finals. He has not faced either this year. We expect Kyle will improve on his 6th place finish from last season.

106 – Junior Tyler Aslanian is the #1 seed at 106 pounds and a defending Section Champion. If Tyler makes it to the finals, he’ll likely see Putnam Valley’s Noah Kelvas, who his little brother Kyle majored earlier in the season.

120 – Senior Trey Aslanian headlines Edgemont’s lineup at 120 pounds as he looks for his fourth Section 1 Title and first State Title. Aslanian will likely have the most anticipated finals match of the tournament, as he appears to be headed for a match-up with multiple time State-qualifier Anthony Calvano of Nanuet.

126 – Edgemont enter two juniors here, Riki Mistry and Sam Klein. Both have the potential to place here. Mistry has the #6 seed and Klein has been steadily improving over the course of the season.

132 – Senior and two-time Section Finalist Sky Korek represents Edgemont at 132 pounds. Korek is the # 1 seed here and looks to secure his first Section title. He’ll first have to get past either Nick Jolly of Lourdes or Dan Guido of Croton in the semi-finals and will likely meet either Chris Bruno of Putnam Valley or Chris Santana of Pawling in the finals.

138 – Once again, Edgemont enters two wrestlers here. Both are seeded and both have the potential to beat their seeds. Junior Will Graybeal is the #4 seed and coming off a third-place finish in last year’s championships. Eighth-grade phenom, #5 seed Cliffton Wang has been having a great rookie season as he has reached the 20-win mark.

145 – Veteran junior Marc Ficuciello takes the mats for the Panthers here. Ficuciello is looking for his first sectional place finish and looks primed to accomplish just that. He is the #6 seed and has really developed a style this season that suits his long frame. He is lethal on top.

152 – Senior Jack McCormack and freshman Fayssal Saleh represent the Panthers at 152 pounds. McCormack is the #2 seed and a two-time Sectional Finalist. He’ll be looking to cap off his high school career with his first title. Saleh has been steadily improving as well and has placement potential.

160 – Seniors Oliver Oks and Ross Kantor are the #3 and #5 seeds here, respectively. We are very happy they’re on opposite sides of the bracket, as both have the potential to win the entire tournament. We’re hoping for an all-Edgemont finals at this weight!

182 – Junior Chris “Korean Lightning” Kim is the favorite here as the #1 seed and a returning Sectional finalist. Kim will likely face the winner of Nanuet’s Mike Buhlmann and Pleasantville’s Pete Salzarulo in the finals. Chris’s quickness and athleticism are very difficult to stop.

195 – Senior Jason Worobow is Edgemont’s anchor man at 195 pounds as he has been all season. He is the #3 seed and has been dominating his competition all season as he quietly amassed 24 victories for the Panthers. Jason has been looking sharper than ever the past few weeks and we think he has champion potential as well.