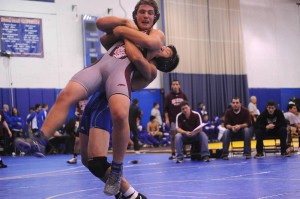 Chris Kim ’14 looks for his first Section 1 Title this weekend.

Get ready for the Post-Season!

The 2013 Section 1 Championships are upon us!

Action kicks off at 9 AM and Day 1 will include the Round of 32, Round of 16, Quarter-finals and four rounds of wrestle-backs in the consolation bracket.

Day 2 of the Section 1 Championships will take place at Pace University’s Pleasantville Campus in the Goldstein Center.

Wrestling on Sunday, February 10th starts at 9 AM.

Six wrestlers from each weight will be brought back on Day 2, four in the semi-finals and two in wrestle-backs. Four rounds will be contested: the Semi-Finals, the Consolation Semi-Finals, the Third- and Fifth-Place bouts and finally the Championship Finals.