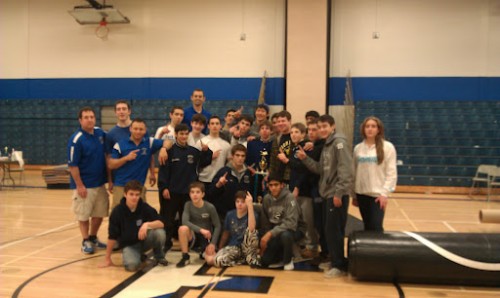 The Edgemont Wrestling Team are no strangers to giving back to the community – only now there’s a degree of competition.

Members of the Edgemont Wrestling Team will be competing this Sunday in the third annual Fire Truck Pull for Breast Cancer. The event will be held at Vision Sports Club, the sponsors of the event, in Pearl River, New York. Teams of ten will be racing against the clock and each other to pull a fire truck 100 feet in the least amount of time. All proceeds from the event will go to the Avon Center for Breast Cancer Research.

“Our team has done community service projects every year for the past several seasons and we thought this would be a great and unique opportunity for a group of wrestlers – particularly those that happen to be coached by a fireman,” said Edgemont Head Coach Pete Jacobson. Jacobson is entering his tenth season at Edgemont – his second as Head Coach – and works full time as a New York City Fireman.

“We really stress to our athletes the importance of becoming great athletes and great people. A mantra we’ve been using for the past year is ‘Building Champions on the mat and in life.’ By giving back to the community when we can, we really underscore that principle. Adding an element of competition makes it even more appropriate and exciting,” Jacobson said.

There certainly will be some competition this weekend as the event is co-sponsored by Nanuet Wrestling, a team Edgemont battles for Section 1 wrestling supremacy each year.  “Coach Serra at Nanuet has a similar mindset in terms of giving back to the community and we are happy to be able to help the cause. We might have a bit of competition this weekend but we all know the real competition comes at the end of February!”

Any interested participants or spectators can come by to Vision Sports Club Sunday morning at 37 Jefferson Avenue, Pearl River, NY 10965. The competition kicks off at 9 AM and food and t-shirts will be available. Come cheer on your Panthers!