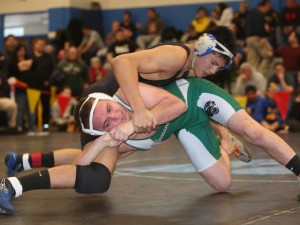 It was supposed to be a re-building year.

Everywhere you looked – rankings, online forums, casual conversation in the Section 1 Wrestling community – you would hear it: “Edgemont lost a lot to graduation last year.” “They’re gonna be way down this year.” “Who do they even have left besides Aslanian and Wang?”

The highest anyone projected Edgemont to finish was a distant 5th place, well behind Nanuet, Pearl River, Pleasantville and Putnam Valley.

Edgemont marched into the Section 1 Championships this weekend with its youngest, least-experienced line-up in recent memory and proved to the doubters that hard work, belief in themselves and their training and a refusal to accept the low expectations of others is what ultimately dictates their results.

Edgemont finished third overall in the team standings in what can only be described as a total team effort:

“Without question, this is the single best team effort in a Sectional Tournament that we have had in my 13 years coaching at Edgemont,” said Coach Pete Jacobson. “Everyone in our line-up contributed and the rest of our team that didn’t compete did a tremendous job the past two weeks preparing our starters for the battles they would face. I credit the hard work of our student-athletes, their buy-in to our system and close family-like atmosphere of our team for the results. I’ve never had such a tight-knit group of wrestlers.”

One thought on “Panthers surprise Section 1 at Championships”