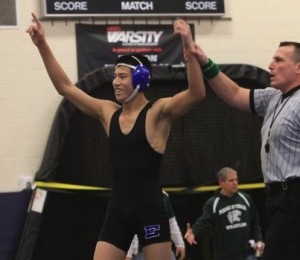 BEACON, NY – It wasn’t the first time the Edgemont Panthers sent five wrestlers to the finals of the Section 1 Championships, it was, however, a history-making event when all five won in dominant fashion to secure their tickets to the New York State Championships and their spot in Edgemont Wrestling history. 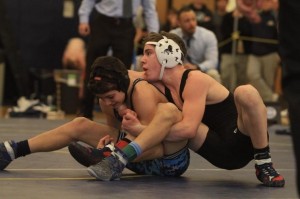 As impressive as five finalist might be (the Panthers only had wrestlers competing in 10 of the 15 weight classes), what is even more telling about the depth and development of the program was the 13 wrestlers (out of 16 Edgemont grapplers competing in the tournament) who placed in the top 6 of their respective weight classes in a Section that spans Westchester, Rockland, Putnam and Dutchess Counties. 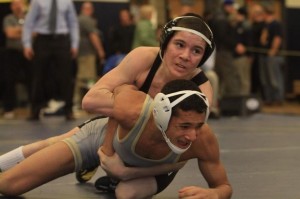 At 106 pounds, Kyle Aslanian knocked off Westlake’s Rob Dinota with an 11-2 major decision to claim his first Section Championship. At 113 pounds, Tyler Aslanian was back in the winner’s circle after a Championship in 2012 and a second place finish last year. Tyler ended his tournament with a 14-0 major decision over Nanuet’s Dillon Mateo. 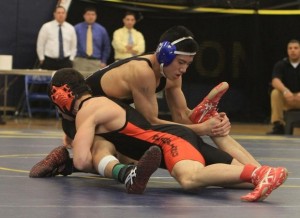 At 138 pounds, freshman phenom Cliffton Wang pinned his way through the entire tournament, culminating in a 3:16 fall in the finals over #1-seeded Chris Santana of Pawling. 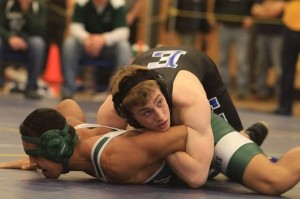 At 145 pounds, Colin Hopkins came out of the 5th seed position to upset the #4, #2 and #1 seeds enroute to his first crown.  In the quarters, Hopkins battled a hard-nosed Zach Martin of Pawling to a 5-5 tie with 30 seconds left on the clock. Hopkins scored a two-point reversal with seconds left to claim a 7-5 lead and the win. In the semi-finals, Hopkins came up against #1-seeded Nick Jolly of Lourdes. Hopkins scored first and controlled the match enroute to a 8-3 decision. In the finals, he would face Pleasantville’s Brandon Castro. Once again, Hopkins would prevail to win his first Section Title with an 8-3 decision. 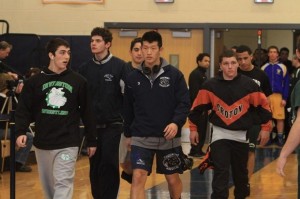 At 182 pounds, senior Chris Kim would not be denied a second Section Title. Kim
scored early and often against Irvington’s Zach Silverhardt, but rather than cruising to a victory, Kim picked up in the third period, scoring six points in the final frame and securing the tech fall and ensuing bonus points by winning 19-4 at 5:57. 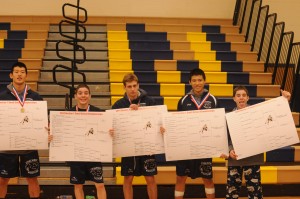 Edgemont’s five Section Champions will be back on the mat competing in the New York State Championships in Albany’s Times Union Arena on Friday, February 28th and Saturday, March 1st. Tickets and more info can be found here.