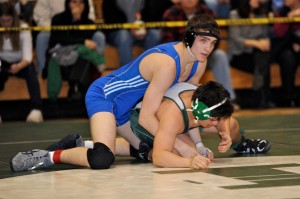 Oliver Oks was dominant at Nanuet and North Rockland this week.

The 170-pound senior missed most of his junior campaign due to injury and in terms of attention could easily be over-shadowed by some of Edgemont’s bigger names: Aslanian, Korek, Hopkins and Kim.

Oks showed Section 1 this week why his name deserves to be on that list, as well.

Oks entered the weekend coming off a dominant win over Nanuet’s 182-pound Section Finalist, Mike Buhlmann. Oks bumped up a weight class to face off with Buhlmann in the two schools’ dual meet on Thursday at Nanuet High School. Oks came away with an impressive 15-5 Major Decision victory that turned a few heads.

“Oliver has been working hard and we know he’s capable of winning a Section Title this season,” said Edgemont Head Coach Pete Jacobson. “A lot of people might not think of him as a Section Title contender but he’s one of the most dominant wrestlers in our room.”

Oks continued to impress at the McGuire Tournament where he recorded a perfect 5-0 weekend with four pins and a 7-0 decision to take home the tournament title. Oks did not give up a single offensive point the entire day.