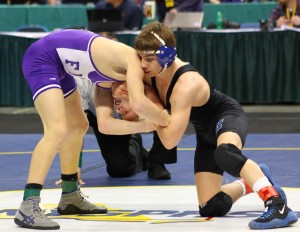 New York Wrestling News will be taking a look at the Sections across the state over the next few weeks.  We began with a story on Section 1 stars Dylan Realbuto and Trey Aslanian, which can be found here.

In addition to returning state champion Realbuto and runner up Aslanian, Section 1 welcomes back two other placewinners from 2012 and more than 15 additional qualifiers.  The following takes a look at some wrestlers to keep an eye on this year, some potential breakout stars and the teams to beat for the 2013 campaign in Section 1.

Trey Aslanian (Edgemont) – The three-time state placer hopes this will be the year.  Aslanian qualified for the finals the past two seasons in Albany but came away with runner up status at 103 in 2011 and 113 last year.  He looked tough over the summer, registering a 7-1 record for the Empire State at Junior Duals in Freestyle and competing at Fargo.

Drew Longo (Ardsley) – In 2012 he found himself out of the medals at a loaded 126-pound bracket at the state tournament, but he’s been on the stand before.  In fact, as a freshman, Longo was the runner up at 96 pounds and he followed that up with a fifth place finish in 2011.  He looks for one more drive to the podium in his last campaign for Ardsley.

Tyler Aslanian (Edgemont) –  The second of three Aslanian brothers currently wrestling for Edgemont, Tyler went 30-8 as a sophomore at 99 pounds.  He notched a pair of victories over fellow Section 1 state qualifier Joe Dillon and came within one bout of making All-State at the Times Union Center.

“Tyler was just short of placing last year and he has worked tremendously hard since the end of the season,” Edgemont coach Peter Jacobson said.  “Our hope is that he makes All-State this year – he’s definitely an All-State caliber wrestler.”

“Skokos has a track record for working hard and making big improvements,” Jacobson said.  “He had a tremendous freshman year and works year round.  I would expect him to make a big jump this year and turn some heads.

Anthony Calvano (Nanuet) – Calvano went 16-5 a year ago and made a dominant run through the Section tournament with a pin and two decisions in which he outscored his opponents by a combined 16-3 tally.  He went 0-2 in Albany but at least one opposing coach thinks he’ll be far better this time.

“I thought his showing at the state tournament last year was not at all reflective of the wrestler that he is.  I believe he will place at the state level this year,” Jacobson said.

In Division II, Nanuet won the crown by over 40 points a year ago and has a slew of contributors back.  In addition to Section champions Vinny Skokos (106), Anthony Calvano (120) and Dan Breit (195), the team offers four more finalists in Joe Dillon (99), Matt Dillon (138), Mike Buhlmann (160) and Kevin Brundage (182).  But that’s not all. Nanuet has several other wrestlers who were in the top six in 2012 on its roster, including three bronze winners.

Mounting a strong challenge will be Edgemont, led by the Aslanian brothers. Three-time state placer Trey was the Section titlist at 113 a year ago after defeating teammate Skylar Korek.  Tyler Aslanian was the Panthers’ other Section 1 victor at 99 pounds, where sibling Kyle also wrestled as an eighth grader (and won 18 bouts).  Silver medalists Colin Hopkins, Jack McCormack and Chris Kim will once again be in the mix, as could Will Graybeal and Ross Kantor, who were both top four.

“We both have a lot of returning finalists and placefinishers,” Jacobson said. “A lot will depend on who ends up going what weight — matchups will be key.  But none of it on paper means that much. It’s going to be a product of what guys have done for the past nine months and will do for the next few months and who has a better weekend. [Nanuet] is the team to beat.  They do a great job, consistently developing their athletes and that isn’t going to change.  But I think the team title could go either way.”

Overcoming those squads will be difficult, but 2012’s bronze team Putnam Valley aims to put some wrestlers on the podium.  One grappler to watch is John Messinger, the 170-pound titlewinner who pinned his way through the event last season.