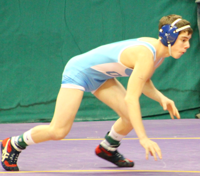 The Aslanians added another NYS medal to the family collection last year as Kyle Aslanian took sixth in Albany at 106 pounds.  He returns after a 25-9 campaign looking to make it two in a row on the medal stand in the state capital.

“Kyle placed last year, but to be honest, we feel he underperformed at the state tournament,” said Edgemont coach Peter Jacobson. “It was his first time up there and, like a lot of kids, he wrestled a little tight.  He certainly had some good matches but others we felt could have gone the other way. He spent a tremendous amount of time for the past seven or eight months really working to improve where he wasn’t as strong. He had the technical tools last year but when push came to shove in high pressure situations, he wasn’t as confident as he could have been. A lot of ground has been gained in that regard. He’ll probably be at 113 or 120 and I think we’ll see a lot more of him controlling a match and wrestling to his strengths, especially against higher level of competition. He’s capable of ending his season much higher on the podium than last year.”

He was the only Division 2 wrestler to garner All-State honors a year ago.  Who are some of the top candidates to pick up postseason accolades in 2015?

The 99-pound title tilt featured the 2013 champion, James Bathon of Pleasantville and Putnam Valley’s Mikey Bruno.  The latter came out on top to earn a spot in Albany.  Each has now competed at the Times Union Center once and will look to make it twice this winter. That’s also true for Noah Kelvas of Putnam Valley, who was a state qualifier in 2013 and had 29 wins last year.

“Bruno and Bathon are both very good,” Jacobson said. “Bathon definitely wasn’t at 100% last year and from what I understand, he is now.  Kelvas is also very good. The way the weights shake out will be interesting.”

And to complicate matters, another wrestler who competed in the state capital (in 2013) on the Division 1 side, James Kelly of Pearl River, will be in the lightweight mix as well as the Pirates are transitioning to small school competition this year.  His teammate Sean McGarvey, who was second in the Section in the large school tournament last year, also is ready to make some noise.

“I think James Kelly and Sean McGarvey can both do damage at the state tournament in Division 2 this year,” Benderoth said.

A few more wrestlers from the first few weights to think about: Degl mentioned that Putnam Valley’s Kyle Sams “could be every bit as good as Bruno” and Westlake’s Robert Dinota won 23 bouts a year ago when he took second behind Kyle Aslanian at the Sectionals.

Nanuet had wrestlers in the finals in four straight classes at last year’s state qualifier – 113 pounds through 132.  With the exception of the now-graduated Joe Dillon at 120, however, the Golden Knight grapplers took second.  Those silver medalists (Dylan Mateo, Eric Boyle and Chris Lowery) will be looking to climb one step higher this time around.  All had at least 19 wins a year ago and the wrestlers that defeated them in the finals have all graduated.

“Mateo wrestled Tyler Aslanian in the section finals last year and Tyler was a lot more experienced and was able to shut Mateo down,” Jacobson said. “Boyle and Lowery are both seniors. Carmine Serra always does a very good job of developing athletes, so to have those kids take second in the Section, I think you have to expect that they will continue to get better and always be prepared to wrestle hard.”

Jacobson also mentioned Edgemont’s Max Worobow as someone who will be contention after taking third at 132 in 2014.

Cliffton Wang of Edgemont was one of just a handful freshmen in the brackets at or above 138 pounds at the Division 2 state tournament.  He was 25-8, including a victory at the Times Union Center.  Look for him to return to the state capital, although up at 152 or 160.

“Cliffton comes from a wrestling family. His brother took third in the state for us several years ago,” Jacobson said. “He really started to get that confidence and come into his own last year.  A couple of small mistakes cost him at states, if you watch the matches as a whole, he was outwrestling the competition. He’s a special kid for a lot of reasons – a tremendous athlete but humble with a great work ethic. He has worked very very hard to really elevate his game to the next level and I’ll be very surprised if he’s not All-State this year.”

“Cliffton might have been a little overwhelmed last year at the state tournament, but I think he should place this year,” the Iowa Style coach said. “He’s very competitive with some tough kids.”

If Wang makes the journey to the state capital, perhaps he’ll be joined by Pawling’s Chris Santana, who took second behind him at the Section 1 championships in 2014. Santana registered a 21-3 mark at 138 pounds in 2013-14.

“Certainly Santana is a very solid wrestler,” Jacobson said. “Cliffton wrestled a phenomenal finals match, but if you look at Santana’s body of work last season, he should be a favorite at almost any weight he’ll be at.”

Who else should we track?  How about Pleasantville wrestlers Brandon Castro and Thomas Marrone?  Both notched runner up showings in the Section, at 145 and 160, respectively.

“Castro is a physical wrestler,” Jacobson said. “When you take kids like Castro and Marrone, who lost to guys in the finals that graduated, it puts them in a position to win the Section, depending on how things shake out.”

Jacobson also pointed to North Salem’s Teddy Fleming, a third place finisher a year ago and returning fourth placer Brian Evans of Edgemont, who “has put in a lot of time and effort to best position himself for a lot of success.” 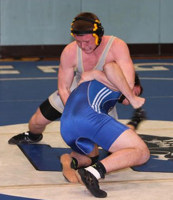 Willie Messinger of Putnam Valley earned his ticket to Albany with a fall in the finals of the Section 1 tournament.  He went 1-2 at the Times Union Center, falling to two eventual placers.  However, he’ll be a challenger again this time around.

Degl said Messinger will be a strong All-State contender this year and Jacobson agreed.

“Messinger is a great kid who works really hard,” Jacobson said. “I can see him jumping levels this year. He has a ton of heart and is someone to look for at the All-State level.”

The weight Messinger won was a tough one, including another upperweight to watch – Peter Jones of Irvington (20-5).  Irvington will be well represented in the high classes, with two silver medalists – Zachary Silverhardt (23 wins) and Adam Krieger (20) also back.

Evan Shlom of Ardsley captured Section 1 gold a year ago, winning at 195 pounds following a 25-victory season.  He nabbed first place in a battle with Nanuet’s Connor Breit, which went to overtime. Breit had a very strong freshman campaign, racking up 26 wins.

“Breit is another tremendously talented wrestler for Nanuet,” Jacobson said. “He has the potential to be better than his brother [Dan, 2013 NYS placer] and that’s saying a lot because his brother was really something.  Other than Cliffton [Wang], I would say Connor was the most impressive freshman in D2 last year.”

Joining Messinger in the Putnam Valley lineup will be another two wrestlers to track – Erdis Canaj and Constantine George, who both won more than 20 times and could take a step forward.

Putnam Valley won the Sectional crown a year ago by over 30 points and the Tigers look like the favorites to make it two in a row.  There’s no doubt that titlewinners AJ Mirabal and Angelo Zegarelli as well as three other medalists will be missed, but there are still plenty of point scorers on the roster. Two of the squad’s four champions, Mikey Bruno (99) andWillie Messinger (170), are back.  Six other 2014 Section 1 medalists are scheduled to compete again this winter, including third placers Jared Eliopolous, Noah Kelvas, Erdis Canaj and Constantine Georgeas well as Satoshi Abe and Sam Honors.  Kelvas took the mat at the state tournament in 2013 and hopes to do so again.

“I think Putnam Valley is the team to beat, but I think Nanuet has a lot of guys coming back and will be very strong,” Jacobson said. “I know Pearl River has some tough kids and I’m curious to see how they’ll fit into the tournament scoring.”

Let’s take a look at a few of those teams. In 2014, Edgemont and Nanuet nabbed second and third place.  The Panthers bring back All-Stater Kyle Aslanian in the lightweights as well as fellow NYS qualifier Cliffton Wang.  In addition, experienced wrestlers who took top six at the Sectional championships last year, such as Max Worobow, Brian Evans, George Mellor and James Hammond will look to win big in February. Head coach Pete Jacobson’s squad did say goodbye to key members such as Tyler Aslanian, Colin Hopkins and Chris Kim, all gold medalists at the state qualifier last season.

Also losing multiple Section 1 first place finishers was Nanuet, with Joe Dillon and Frank Paratore moving on, as well as runner up Alex Slaybaugh.  However, the Golden Knights bring back a large group of placers, including four silver medalists – Dylan Mateo, Eric Boyle, Chris Lowery and Connor Breit.  Both Breit and Boyle went to overtime in their finals matches.  All will be hungry for their opportunity to go to the Times Union Center after coming close last year.  They will be joined by three more teammates who placed in the Section – Akif Ahmad, Karl Burnich and Dennis Van Dunk.

Could Pleasantville make a run?  All but one placer returns, although that was two-time state qualifier Stephen Paternostro.  Still, the squad will rely on 2013 state qualifier James Bathon and seven others who made the Section 1 podium last year, including second placers Brandon Castro and Thomas Marrone and third placer Lou Quintanilla to stay in the thick of things.

What impact will newcomer Pearl River, moving over from Division 1, have?  It could be quite significant, with James Kelly and Sean McGarvey leading the way.

“I think Pearl River will come in and be right in the mix to win it,” Swick said. “People know about Kelly and McGarvey but two eighth graders, Jack Chesman and Dylan Urban, will be very good and Jake Kurzhals is also someone to watch.”