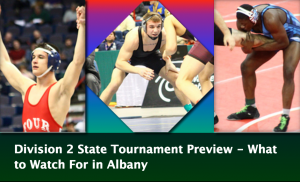 We’re just a few days away. For each of the Division 2 brackets, we took a look at the returning placers and qualifiers, a first round match or two that we look forward to watching and a few other thoughts on the class.

Our Division 1 preview can be found here.

Please note that there have been changes to the brackets since the original versions were posted. For the most recent brackets, go to www.trackwrestling.com and search for “2015 NYSPHSAA State Championships.”

If you haven’t yet entered our prediction contest, feel free to do so here.

Don’t forget to visit our site during the state championships!

Right Off the Bat: Ralph Oswald of Hampton Bays had an emotional run to the Section 11 title. After losing his father earlier in the week, Oswald put together an outstanding performance to punch his ticket to Albany. He’ll meet a wrestler we think will make a podium push – Mike Dusold of Locust Valley – in the opening round.  In addition, Israel Byler of Addison enters with a lot of momentum.  He registered a number of wins over NYS qualifiers in the past few weeks of the season, including Warsaw’s Josh Grifffth twice and will take on Colby Davendonis of Hoosick Falls, a wrestler who lost just twice this year (both in overtime).

Keep an Eye On: Edgemont’s Cliffton Wang is back as a sophomore and is a medal contender, as are other 10th graders, Madison Hoover of BGAH andCaleb Beach of South Jefferson.

Norwich’s Frank Garcia has just one loss as a senior – to Jakob Restrepo of Sachem East in the Eastern States title match. He is already a two-time finalist who collected his first NYS championship at this weight a year ago. But repeating won’t be easy. A pair of Section 6 wrestlers who have both taken silver in Albany during their careers will be in the hunt. 2014 finalist Andrew Shomers of Lewiston Porter won the showdown with Dakota Gardner of Fredonia last weekend and another clash in the state semis seems like a good possibility. Both are tough, but we’ll take Norwich back-to-back with Rifanburg and Garcia.