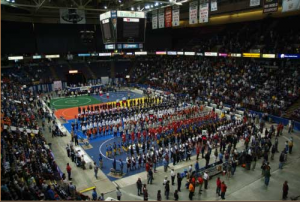 Trey Aslanian and Chris Kim take the mat in three days at the New York State Championships at the Times Union Center in Albany!

All the info you need can be found below!

We will be live tweeting results throughout the tournament! Make sure to follow us on Twitter at @EmontWrestling!

Live Streaming of the early tournament rounds can be found here!

New York Wrestling news will be live blogging results on all 8 mats as well.

The 2013 high school wrestling state tournament will be held at the Times Union Center in Albany, NY on Friday, February 22nd and Saturday, February 23rd. The tournament is sponsored in part by the US Navy, Worldwide Sport Supply, Jostens, CSEA, The Hilton, Journeymen, Price Chopper, MaxPreps and the American Dairy Association.

The 2013 tournament, now in its 10th year of a two-division format, will see 480 student-athletes from approximately 400 schools participate from each of 11 sections, along with qualifiers from the New York City Public School Athletic League (PSAL) and the Catholic High School Athletic Association (CHSAA).

Tickets are on sale today at the Times Union Center Box Office, select Wal Mart locations, charge-by-phone at 1-800-745-3000, or online at www.timesunioncenter-albany.com.

SUITES are NOT available for this event.

The New York State Public High School Athletic Association Wrestling State Tournament is one of the biggest high school events of the year. With 480 qualified wrestlers competing in the tournament each year, attendance of the event has grown significantly since 2004, when the format changed to two divisions. Fans and participants from all over New York State have converged on the Capital Region the last several years to watch this great event in one of the top venues in the state.

Here is a historical list of championship venues since 1963: