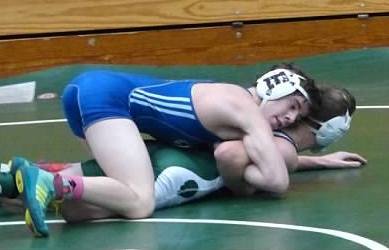 Edgemont Senior Kyle Aslanian looking for his 2nd trip to the podium in Albany.

The Elite 15
The best returning wrestlers from Westchester, Putnam and Rockland Counties

Kyle Aslanian, Edgemont — After earning All-State status as a sophomore, Aslanian lost a heartbreaker in last year’s 120-pound section final. That will provide plenty of motivation for his senior season.

Connor Breit, Nanuet — One of the most physically-gifted upper weights in the area won his first section title last season and is poised for big things as a junior.

Nunzio Crowley, Eastchester — Not only did the senior win his first section title last season, he went onto place fifth in the state at 170 pounds and thrust himself into this year’s state title conversation.

Grant Cuomo, Brewster — As a freshman, Cuomo took second in one of the deepest weight classes in Section 1. As a sophomore who already has 100 career wins, he’ll have an excellent shot at going much further.

Mike DiNardo, Mahopac — The senior overcame past injury issues last season, going onto win a section title and take fourth in the state at 182 pounds after entering the tournament unseeded.

Matt Grippi, Fox Lane — A two-time section finalist who already has 100 career wins entering his sophomore season, this should be Grippi’s year to finally earn a spot in the state tournament.

Kevin Knox, Carmel — After winning his first section title at 126 pounds last season, look for Knox to make a push for the podium in Albany as a senior.

Jake Kurzhals, Pearl River — No returning wrestler in Section 1 went as deep into last year’s state tournament. Kurzhals went to the state finals at 126 pounds and should be a title contender as a senior.

Stephen Lauro, Suffern — The Mounties graduated a few of their heavy hitters, but the senior returns as a defending section champ and clear leader of the pack.

Justin Lopez, Yonkers — A wild card entry into the state tournament last season, Lopez made a surprise run to place sixth in the state at 99 pounds and will enter his senior season as an established contender.

Conor Melbourne, John Jay — It was a disappointing finish for Melbourne, who placed third in the section at 138 pounds after a strong showing at the prestigious Eastern States Classic. He’ll be on a mission as a junior.

Adam Melikian, Lakeland/Panas — Melikian placed fifth at 182 pounds at Eastern States last season and has transferred from Kennedy Catholic to become a Rebel for his senior season.

Kyle Sams, Putnam Valley — After bursting onto the scene to win a section title as a freshman last season, Sams will be a known commodity with tons of upside as a sophomore.

Anthony Sulla, North Rockland — Not only did the senior win his first section title with a first-period pin last season, he also went onto place sixth in the state at 106 pounds.

Trey Wardlaw, East Ramapo — The senior surfaced out of a deep field at 99 pounds to win his first title last season and possesses uncanny strength for a lightweight.

1. Putnam Valley — There is a razor thin margin between Put Valley and Pearl River. And while PR has more wrestlers returning who placed last season, the two-time champs are expecting a big boost from Noah Kelvas and Jared Eliopoulos, who missed sectionals due to injury.

2. Pearl River — The Pirates were just nine points behind Put Valley last season and bring back five of their sixth finalists from last season. It’s going to be very, very close.

3. Edgemont — The Panthers might not have quite as much firepower as the top two, but they’re not far off, either. Seven wrestlers return who placed last season.

4. Nanuet — Longtime coach Carmine Serra has retired, but the Golden Knights have a strong tradition and a handful of capable athletes coming back, which should keep them in the top five.

5. Pleasantville — The Panthers arguably had as much depth as any team in D2, but the lack of an individual champ kept them from cracking the top five and could be an issue again this season.