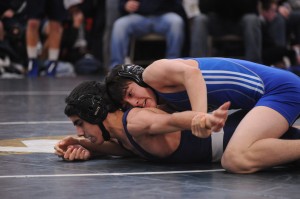 Edgemont: The Panthers are stacked with two returning section champions in the Aslanian brothers, Trey and Tyler, plus four other section finalists. They’re hoping this is the year in which they finally breakthrough to capture that elusive team title.

Nanuet: If any team in Division 2 has more coming back than Edgemont, it’s the two-time defending champion Golden Knights. All five of Nanuet’s state qualifiers – Vinny Skokos, Anthony Calvano, Dan Breit and the Dillon brothers, Joe and Matt – are back, along with nine other sectional qualifiers.

Trey Aslanian, Edgemont: The senior has been a state finalist for two years in a row and will look to get over the hump this season. He’s expected to wrestle at 120 pounds.

Dan Breit, Nanuet: After winning a section title, the senior was one win away from placing at states last season. He’s expected to wrestle at 220 pounds.

Anthony Calvano, Nanuet: The four-time state qualifier is coming off of a season plagued by illness, yet he still managed to win a section title. Now healthy, the senior expected to wrestle at 120 or 126 pounds.

Drew Longo, Ardsley: After placing at state as a sophomore, Longo finished one win away from doing so last season. The senior is expected to wrestle at 132 or 138 pounds.

Three questions for the season

With three-time champ Brian Realbuto of Somers gone, who is Section 1’s best shot for a state title? Brian’s younger brother Dylan is the only returning state champ from the section, so he’ll be a front-runner to repeat in Division 1. Edgemont’s Trey Aslanian represents the section’s best bet in Division 2 after reaching the state finals in back-to-back seasons.

Which weight classes are most up for grabs? As is usually the case, the heavier weights were hit harder by graduation than the lighter weight classes. In Division 1, 170 and 220 should be weight classes to watch, while 182 and 195 will be interesting in Division 2.

Who are the favorites for team titles? This has the potential to be a big year for Rockland County. North Rockland looks like the favorite in Division 1, while Nanuet is in prime position for a third straight championship in Division 2. The biggest challengers should be Yorktown and Edgemont, respectively.