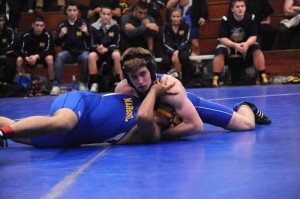 Colin Hopkins ’14 is ranked first in the section at 145 pounds.

After hours upon hours of scouring through results, I’m finally ready to release my latest LoHud Wrestling weight class rankings for Section 1. It’s formatted the same way that I’ve been doing it for the past few years – top three in each class for D2. I’ll update these again before sectionals, but this should give you a pretty good idea of how these guys stand at this point of the season. Just to note, all of the records listed for each wrestler came from nwcaonline.com, the database used by coaches to track stats throughout the season. If a guy is missing any matches, it’s because the coach has yet to input them.

I’ll be heading out to the Eastern States Classic tomorrow morning, so stay tuned for more details on our extensive coverage of the biggest regular season tournament in New York state.

113
1. Tyler Aslanian, Jr., Edgemont (7-2, 2 pins)
2. Andrew Barsuch, Jr., Croton-Harmon (23-2, 16 pins)
3. Mark Taino, Sr., Pleasantville (22-5, 19 pins)
Notes: Aslanian hasn’t wrestled since Dec. 6, but he does have a head-to-head win over Barsuch by major decision. He’s expected to return soon, and as a defending section champ, he deserves the top spot… Barsuch has had an outstanding season with a notable win over ranked D1 wrestler Jon Errico of Byram Hills… Taino at No. 3 shows you how deep this class is. He pinned McLiverty at the Scarsdale tourney, who is No. 1 in this class at D1. You could make an argument for any of these three would be the top guy in this class in D1.

120
1. Trey Aslanian, Sr., Edgemont (25-0, 14 pins)
2. Anthony Calvano, Sr., Nanuet (19-0, 10 pins)
3. Stephen Samolsky, Sr., Ardsley (20-2, 7 pins)
Notes: After looking like he was going 126 all season, Calvano has made the move to 120 in the new year. That means we have the two most accomplished wrestlers in D2 in the same weight class, setting up a potential juggernaut of a section final. It’s an odd decision, but both Aslanian and Calvano are pretty much locks to get to states with the wild card system… Samolsky is having an outstanding season as well, making this the most stacked D2 weight class in the section.

126
1. Joe Dillon, Jr., Nanuet (17-2, 10 pins)
2. Adam Mirabal, Jr., Putnam Valley (9-2, 4 pins)
3. Stephen Paternostro, Jr., Pleasantville (18-4, 13 pins)
Notes: Also watched out for Ardsley’s Jonah Gerstel… With Calvano dropping down to 120, Dillon has been at 126 recently and is registered there for Eastern States. It looks like he should have a better shot at a title here… Mirabal missed some time in the middle of the season, but he came back with a couple of nice wins this weekend. He’s been tough against some quality guys, including a one point loss to Trey Aslanian.