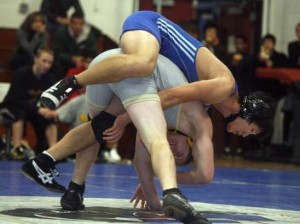 It happened to be a complete coincidence that Edgemont coach Pete Jacobson sent in his team preview right after Nanuet’s came in, but it’s also quite fitting. The Golden Knights are the team that the Panthers have been chasing in recent seasons, and it looks like that will be the case again this year. Edgemont took second in the Division 2 sectional tournament last season, and the Panthers will once again be looking to close the gap and win that elusive team title. There’s also individuals who have lofty goals, particularly senior Trey Aslanian, who will be looking to capture a state title after coming in second for two consecutive seasons. Edgemont is certainly bringing back enough talent to make some noise.

How did your team do last season? Dual meet record: 13-17; League Dual Record: 5-0 (undefeated league champs for past three years). We entered 16 wrestlers in sectionals (12 placed in the top six). We finished second with 235 points (the most points we’ve ever scored in sectionals).

What is the biggest strength of your lineup? Senior leadership and team work ethic. Many of our returning wrestlers have proven themselves in tough competition and the level of intensity they bring in the training room forces everyone (including the coaching staff) to continually raise their level.

What is your biggest concern entering the season? We’ll have a large roster this season and we’ve been working hard to make preparations that will allow us to get every athlete on our roster the quality competition and preparation they need to reach their full potential in the postseason. If we have 30 athletes, we want the 30th guy as prepared as the first guy to step on the mat and represent himself well every match.

Which team(s) is your biggest rival? We have our rivalry match The Bronx River Cup every year against Scarsdale. This year we’ll be wrestling at Scarsdale on Friday night, January 25th at 6 p.m. Year-in and year-out this is always a fun, competitive match. Historically, it’s almost always decided by six points or less. Those are the kind of situations you want to put your team in.

Will you host any tournaments this season? The 31st Annual PantherTough Invitational will be held on Saturday, January 19th. We’ll be hosting 19 schools from NYC, Private Schools, Catholic Schools, Section 1 (Large and Small Schools), Section 9 and Connecticut.