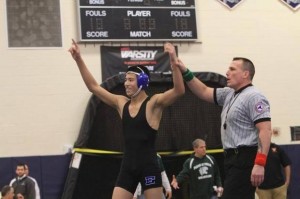 Sophomore Cliffton Wang looks to return to the State Championships in Albany this year.

Believe it or not, we’re just five days away from the first official practices of the 2014-15 season. Time flies, doesn’t it?

To lead-off our series of previews, we’ll take a look at a perennial contender in Division 2. Edgemont placed second at sectionals last season and brings back two of its five section champions, including state-placer Kyle Aslanian (pictured below). Kyle, who is entering his junior season, was the only local D2 wrestler to place at states last season and looks like the best shot that Section 1 has for a D2 state champion. He’ll look to follow in the footsteps of older brother and 2013 state title winner Trey, who is now wrestling at Princeton. The Panthers took some hits to graduation, but they have some young talent coming up and should once again be right in the mix in D2.

Here are the responses that I received from coach Pete Jacobson, who has been coaching in the program for 13 years and is entering his fourth season as head coach:

How did your team do last season? Second in the section. Dual meet record: 10-13 overall; 5-1 in the league.

What is the biggest strength of your lineup? We will have very strong leaders this year. From what I have already seen, they will do an excellent job keeping our team focused, working with our less experienced athletes and setting a strong example.

What is your main area of concern entering the season? We have a lot of young, inexperienced wrestlers on our roster. We need to balance their development and at the same time give our higher-level athletes the preparation they need to be at the their best in the postseason.

What did your team do to make progress in the offseason? Many of our wrestlers made the commitment to train at clubs in the offseason and we had a greater buy-in to offseason strength training than in the past. We also took a group of them up to camp to train over the summer.

Which team(s) is your biggest rival? We try to keep our focus more on ourselves than any particular opponent. However, we have an annual “rivalry” match, the Bronx River Cup, vs. Scarsdale on Friday, January 30th at Scarsdale High School.

Will you host any tournaments this season? We will host the 33rd Annual Edgemont Wrestling Tournament on January 17th, featuring 19 teams from Division 1 and 2, Section 9, Catholics, Privates and Connecticut.

How would you assess the state of your program? Strong and growing! We have really made strides over the past several years instilling a deeper culture of commitment amongst our student-athletes and their families. Looking forward to our teams at all-levels taking it another step further this year!