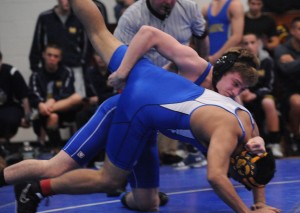 There’s something about predictions that always seems to get the juices flowing. Those who I pick to come out victorious tend to feel that their hard work has been justified, while those who I pick to lose are often determined to make me eat my words. It’s easy to take it personally, but I prefer to view it as healthy and spirited conversation. To me, these are the type of exercises that make this job so much fun.

I’ll be posting plenty of predictions this season—whether it’s which team is going to win the Section 1 duals, or which wrestlers will win sectional titles—but I’m going to start this season with my predictions for how the league title scenarios will play out. I’ve taken a close look at each league, considered how strong each team’s dual meet lineup should be, and come up with some conclusions. Whether you agree or disagree, feel free to express your opinions in the comments section, just make sure to keep things appropriate.

Predicted champ – EDGEMONT: There are a lot of ways that you could go here, but I ultimately see Edgemont as the team to beat in a field filled with small schools. The Panthers should be very strong from the light-to-middle weights, but they usually tend to give up some forfeits in the upper weights. They could lose a handful of matches up top, but I don’t see any team in the league that is strong enough to challenge them top-to-bottom. Edgemont also should have a big advantage against league opponents from about 99-152.