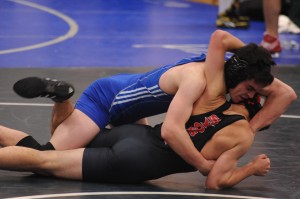 What was considered to be a loaded Edgemont team last season may be even more stacked this year. The majority of the Panthers’ big pieces are back, and now one year better, which has brought on high expectations. After finishing second in Division 2 last season, the focus is clear as day.

“My individual goals have been the same since I’ve been in high school – dominate my way through the season and win that state title,” two-time state runner-up Trey Aslanian said. “It’s a little this year because I think there’s added pressure in terms of the team. I think there’s a lot more pressure to the win team title this year and do well at the state tournament, just because I’ve been wrestling with these kids since the peewees, and with my brothers for as long as I can remember. This is the last time we’ll on a team together, so it’s important that we come together and get it done.”

There’s no tip-toeing around the elephant in the room. Barring injuries, Edgemont seems to be more talented and experienced than any other D2 team – except for one. Two-time defending section champ Nanuet has stood in the Panthers’ way in recent seasons, and the Golden Knights bring back pretty much everyone.

That means that Edgemont will have to turn it up a notch to capture that elusive team title.

“We’re returning four or five sectional runner ups, and including Trey and Tyler (Aslanian), two section champions,” senior Jack McCormack said. “That kind of depth and that kind of ability to place coming back is really going to be very beneficial for us. That’s not to say that Nanuet doesn’t have that too, because we know that they have a solid team. They have a lot of depth and experience returning, and so do other teams. Put Valley, Irvington – they’re all good. We’re working every day and pushing ourselves because we do have that goal to reach. When you’re the underdog and you’re not at the top yet, you have that much more fire and desire to make it to the top.”