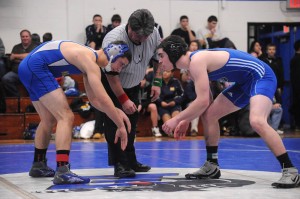 With the Section 1 Dual Meet Championships having been concluded and about three weeks worth of season in the books, this seemed like a great time to release my dual meet power rankings. The early portion of the season is usually heavy with dual meet competition before teams shift their focus to tournament settings for the latter half of the season. I’ll put out my newest weight class rankings after the holidays, but the spotlight is on complete team performance for now.

I’ve ranked…the top five in Division 2…All of the team records listed are as I found them on nwcaonline.com, so if there are any inaccuracies, it just means that the coach of that particular team has yet to input all of his results. As you can see, some teams have been involved in dual meet tournaments that have helped them compile more wins (or losses).

1. Nanuet (11-3) – There’s no denying that the Golden Knights are the best D2 dual meet team after back-to-back Section 1 Dual Meet tourney titles, but I believe that you can make a case for Nanuet as the second-best team in the section after North Rockland. Their dual on Tuesday came down to the final match, which made the Red Raiders sweat more than they have had to all season. Without question, the Golden Knights are one of the top five dual meet teams in the area with a lineup that makes most large schools jealous. Nanuet has a ton of experience, putting out quality wrestler after quality wrestler. No losses so far for Anthony Calvano and Dan Breit.

2. Edgemont (10-11) – The Panthers locked down the No. 2 spot with another trip to the finals of the Section 1 duals. They have a lineup that you could argue belongs in the top 10 in D1, adding to the list of D2 teams that can compete with larger schools. Edgemont hasn’t been able to get past Nanuet due to forfeits in the upper weights, but from 99-182 pounds, the Panthers have comparable talent. Their record appears mediocre because of the strong competition that they’ve sought out, but this team is trying to prepare for late season run.

3. Putnam Valley (6-4) – The Tigers often get overlooked because of how strong Nanuet and Edgemont are, but when discussing D2, it would be unfair to leave them out. Put Valley has displayed consistency over the past few seasons, and a solid start this year has continued that trend. A fifth place finish at the Chase Media Group Duals – higher than any other D2 school – provided evidence of that. This looks like it could be a strong year for small schools.

4. Irvington (6-1) – While we had a good feeling about who the top three teams in D2 would be, the Bulldogs made their case for the fourth spot by advancing to the semifinals of the Section 1 duals. Irvington has rarely been forfeiting any weight classes, which is always a recipe for success in a dual meet setting, but there have been some pleasant surprises beyond big names such as Brett Pastore and Anthony DiNardo. This team seems to improve and get deeper each season.

5. Ardsley (4-7) – The Panthers just missed out on the fourth spot when they lost to Irvington by just two points at the Section 1 duals, but that proved that they were a top five team. They’ve knocked off other teams that I considered for this spot such as Pawling and Pleasantville, which made Ardsley an obvious choice. We all know about Drew Longo, but the Samolsky’s (Adam and Stephen) and the Kogan’s (Jeremy and Russel) have also come up big.

On the fringe: Croton-Harmon, Pawling, Pleasantville

Happy Holidays everyone! Enjoy it and be safe!