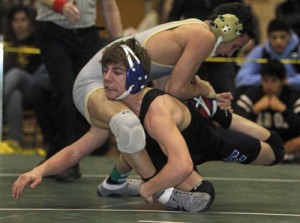 From the LoHud Wrestling Blog.

For the fourth time in his career, Edgemont’s Trey Aslanian is a section champ. His win on Sunday was probably one of the closer section finals that he’s been involved in, as he defeated another one of the more decorated wrestlers in the section in Nanuet’s Anthony Calvano with a 3-1 decision in the 120-pound Division 2 final. Usually, Aslanian has made it through the section tournament with relative ease, but he hopes that matches against quality competition such as Calvano will help him end his career on a high note. Aslanian has taken second in the state for two years in a row, so this will be his last shot at capturing that elusive state title.

How many years have you been wrestling for? Seven.

Is this your first section title? No, this is my fourth.

Describe what was going through your head when the referee raised your hand after the finals: I felt that I was a step closer to my goal.

What was the most difficult obstacle that you had to overcome this season? An injury which slowed me down for a few weeks.

What area do you feel that you’ve improved in the most over the course of the season? My offense.

What are some of your favorite things to do outside of wrestling? Hang out with my friends and family.

What is playing in your headphones while you get ready for a match? I don’t listen to music before my matches; I like to have a clear mind and focus on what I need to do.

What is your favorite TV show? Breaking Bad.

Name one thing that’s interesting about you that people may not know about: I am a black belt in karate.