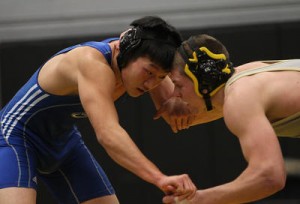 From the LoHud Wrestling Blog.

After taking second last season, Edgemont’s Chris Kim captured his first section title last weekend. The junior made a wise decision to wrestle at 182 pounds after wrestling at 170 for much of the season, which paid off with a 14-5 major decision over Pleasantville’s Peter Salzarulo in the Division 2 finals. Kim’s quickness and athleticism served him well against larger opponents, and he seemed to wrestle his best at the right time. Now he’ll try to do the same in Albany.

How many years have you been wrestling for? Five.

Is this your first section title? Yes.

Describe what was going through your head when the referee raised your hand after the finals: Finally won the title. Felt like all the pressure was relieved.

What was the most difficult obstacle that you had to overcome this season? Listening to (coach) Pete Jacobson yell.

What area do you feel that you’ve improved in the most over the course of the season? Wrestling on my feet.

What are some of your favorite things to do outside of wrestling? Play football, lacrosse and chilling with friends.

What is playing in your headphones while you get ready for a match? I don’t listen to music before my matches.

Name one thing that’s interesting about you that people may not know about: People on the team call me Korean Lightning (Pete’s idea…).