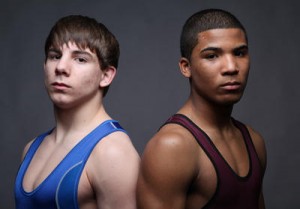 From The LoHud Wrestling Blog.

The more thought I put into the Westchester/Putnam wrestler of the year debate, the more I felt that the only fair choice was to name Edgemont’s Trey Aslanian and Ossining’s Alex Delacruz as co-winners. They both won state championships, they wrestled in the same weight class, and they never had an opportunity to wrestle each other (that would have made my decision easy). Aslanian and Delacruz had similar low points—tough losses at Eastern States—and they each had to overcome opponents who had gotten the better of them in the past to claim their state titles. For the second time in three years (Somers’ Brian Realbuto and Fox Lane’s Steven Rodrigues split the award in 2011), we have co-wrestlers of the year in Westchester/Putnam. You can see the full all-star package in today’s edition of The Journal News.

Two state champions from Section 1 were crowned this past February in Albany, but neither was a popular pick to win heading into that weekend.

There were certainly low points for Edgemont senior Trey Aslanian and Ossining junior Alex Delacruz during the season, which ensured that both upset-minded wrestlers came into the state tournament with something to prove.

“One thing that Alex and I have in common is that we both have that supreme confidence,” Aslanian said. “We were both, I would say, underdogs going into the weekend, and to be a state champ, you have to know you’re going to win.”

Each wrestler won his state title at 120 pounds, with Delacruz doing so in Division 1 (large schools) and Aslanian claiming his in Division 2 (small schools). With each overcoming the odds to win and the two having never wrestled each other, the only logical choice was to name them as The Journal News Westchester/Putnam co-wrestlers of the year.

Any potential match between the two will have to be left to the imagination.

While they wrestle in the same weight class, their styles are drastically different.

Aslanian is regarded as one of the most polished wrestlers in the state — a well-conditioned technician who rarely makes mistakes. As a three-time state finalist and Edgemont’s all-time wins leader, he’s developed the reputation as an extremely focused and devoted athlete.

“There are a lot of things that go into maturity — physical maturity, emotional maturity — but at a very young age, he set a series of goals for himself, and he went right to work to accomplish those goals,” Edgemont coach Pete Jacobson said. “He really was fixated on becoming the best wrestler that he could be.”

Delacruz is known more of as a physical freak with explosiveness and athleticism that often goes unmatched. High-scoring matches generally favor him, and his ability to notch a takedown in the blink of an eye is well-documented.

“Right off the whistle, he can score in any second,” Ossining coach Larry McRae said. “He can explode into a pin in any minute, so he’s never out of a match.”

Their approaches may be different, but the paths to becoming state champions for both Aslanian and Delacruz were eerily similar. Both faltered at the prestigious Eastern States Classic in January after coming into the tournament undefeated, and both had to avenge losses against familiar foes if they wanted to capture a state title.

For Aslanian, that meant beating defending state champ Sean Peacock of Midlakes, who had defeated him in last year’s state final. Driven to avoid that losing feeling for the third consecutive year, the Princeton-bound senior was able to pull off the upset with a 4-2 decision.

“I saw my little sister Zaza. … She started crying after I lost in the state finals last year, and that got me deep down,” Aslanian recalled. “I was like, ‘I can’t do that to them again. They invest so much time in me, how could I do that to her and my family?’ ”

Delacruz had to get past an even more recognizable opponent to reach his goal of becoming a state champion. After beating Pearl River’s John Muldoon to win his first section title in 2012, Delacruz was disqualified from his semifinals match against Muldoon at Eastern States for an alleged bite. The two met again in the section final, with Muldoon prevailing on a 10-7 decision.

Most figured that Muldoon would be Section 1’s best shot for a state champ at 120 pounds, but Delacruz showed his resiliency with 6-4 overtime decision to knock off his rival in the state semis on his way to a title.

“I spoke to my coaches right after sectionals, and I told them I wouldn’t lose — I can’t lose. I’ve been working too hard for this,” Delacruz said. “It was difficult going in there knowing that everybody thought that Muldoon would win that match, but it pushed me more to want to win because of that.“

Here are the rest of the first-team all-stars

Coach of the year — John Tornambe, Yorktown: The fifth-year coach has transformed the program into one of the best in Section 1, as they finished higher than any previous Huskers team in the section (second) and in the state (15th). Tornambe developed a stellar senior class that sent four wrestlers to the state tournament — more than any other local team.