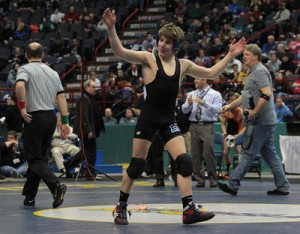 ALBANY — For two straight years, Edgemont’s Trey Aslanian made it to the state finals but went home empty-handed. The Panthers’ all-time wins leader found himself in familiar territory on Saturday at the Times Union Center, but he refused to make it a three-time occurrence.

Up against top-seeded Sean Peacock of Midlakes in the Division 2 New York state final at 120 pounds – the same wrestler who had defeated him in the finals last season – Aslanian overcame an early deficit on his way to a 4-2 decision and his first ever state championship.

“I wouldn’t change it for the world,” said an exuberant Aslanian. “It made this that much sweeter, I’ll tell you that. It hasn’t really sunk in; I feel like I’m dreaming right now. I’ve dreamed about it so many times, and now it’s happening in real life. It’s unbelievable.”

The Princeton-bound senior was taken down in the first period, evoking memories of years past. But he didn’t let Peacock score again after that, controlling the pace of the match and executing his strategy for the upset win.

“He got that takedown and for a split second you go, ‘This might happen again,’ ” Aslanian said. “I’m happy I didn’t dig myself into too much of a hole in that first period. You can overcome a two-point deficit, but against a kid like Sean Peacock, you can’t overcome a five-point deficit.”

The other local wrestler to win a state title on Saturday was Ossining’s Alex Delacruz, who won his first state title in Division 1 at 120 pounds with an 11-7 decision over top-seeded Steven Michel of Lancaster.

“It’s pretty much the greatest feeling I’ve ever had, to be honest,” Delacruz said. “Just going out there as a wild card, the third seed, after losing to (Pearl River’s John) Muldoon in the section finals and then beating him here, it’s a complete turnaround.”

Delacruz lost a 10-7 decision to Muldoon in the section finals two weeks ago, but he had an opportunity to avenge that loss in the state semifinals. The junior prevailed in overtime with a 6-4 decision, and then overcame a one-point deficit going into the third period of the finals to lock down a state championship.

“Winning that match (against Muldoon), I kind of felt like I could win the whole thing, but in the back of my head I also thought I have one more match to reach my goal,” he said. “I had to stay focused; I couldn’t just be satisfied with that win. It meant a lot – don’t get me wrong – it just didn’t mean as much as a state title.”

While Aslanian and Delacruz were the only local finalists, Somers senior Dylan Realbuto (126 pounds), Fordham Prep’s Sam Melikian (132) and Yorktown’s Joe Mastro (152) each took third in Division 1. Realbuto, the only defending state champ from Section 1, bounced back with a strong

performance on the second day of the tournament after getting upset in the quarterfinals on Friday.

“It was really important,” Realbuto said of wrestling back well. “I wanted to prove to everybody that me losing that quarterfinals match was just a fluke. It had a lot to do with pride. I just wanted to come back and win.”