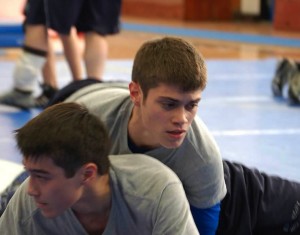 With a wrestling program as strong as Edgemont’s, with all the titles and championships and record-setting performances, it’s sometimes easy to overlook some of the other success stories.

“Edgemont Wrestling really has one goal: ‘Building Champions on the mat and in life.’ That goal is the same every season and with every wrestler,” and is one that Edgemont coach Pete Jacobson feels the Panthers are constantly achieving.

“At the end of the day, the window of competitive wrestling in each of our athletes’ lives is short, but the goal is that the qualities those experiences develop will lead them to lives full of challenges overcome and successes reached,” Jacobson said.

Junior Sam Klein is not Edgemont’s winningest wrestler, but following his performance at the Section 1 Championships this past weekend at Irvington High School, it is clear that he is another proud Edgemont Wrestling Champion.

Entering the tournament as the 12-seed, Sam lost to his first opponent, Brian Luciano of Our Lady of Lourdes. “I lost pretty sizably in my first match,” Sam recalls. By all appearances, this could have been a short day for him.

Sam was undeterred, however. He wrestled back and took 5th place at the Section 1 Championships, despite his 12th seed and his early defeat. His opponent in that final match? Sam’s first adversary of the day, Luciano. “I came back and pinned him in my last match, which was a nice way to finish.”

A great finish to a great day, but all the more meaningful to those who have followed Sam’s career. Sam joined the modified team as an 8th grader. In the four years spent as a wrestler for the Panthers, Sam had not seen as much competitive success as he would have liked. He struggled with his win and loss record his first few years.

“It wasn’t that it was disheartening, but I always wanted to be good, so I really put a lot more into practice and really did what I could to improve.”

Where some would chalk the lack of success up to a failed experience and move on, Sam has consistently put his head down and worked even harder. And his efforts have not gone unnoticed. Edgemont’s coaching staff is aware of Sam’s mettle. “Sam is one of the most resilient athletes I’ve coached,” said Coach Jacobson when asked to comment on Sam’s tenure with the Panthers. “He continues to work hard and improve. He has always been able to bounce back stronger and despite disappointments, has consistently gotten back in the wrestling room and strived to improve.”

“I definitely thought about not wrestling, but I knew I’d never be able to live with that. The only option for me was to improve and get something out of it, not give up on it. I didn’t want it to beat me. Even at my lowest points I would think, ‘I’ve put way too much into this and I cant give up now’,” Sam said.

When asked to pinpoint where his determination comes from, Sam can only identify where he fine-tuned his ability: the wrestling mat. “I think it’s a universal thing for anyone who wrestles,” explains Sam. “You just get a different mindset that really does carry into the rest of your life.”

“Any kind of challenge or obstacle I come across, I approach with a mindset differently than I would have before I wrestled. You see the challenge in front of you, you foresee yourself getting over the challenge, and then you put in the effort to actually get over the challenge. I learned that from wrestling.”

This year, as a junior, Sam embraced the opportunity to become a starter. On two separate occasions, he won wrestle-offs against his teammates to remain Edgemont’s number one wrestler at the 126-pound weight class. He bumped up to 132 pounds when called upon, always willing to do whatever the team needed of him.

Sam continued to struggle in competition, though. “Even through the beginning part of this year I wasn’t seeing the results I wanted to after the work I was putting in,” admits Sam. “I felt that I was putting in everything I had and there was still something missing. It got discouraging at times.”

Coach Jacobson noticed his wrestler’s disappointment, but was confident in Sam’s grit heading into this year’s Section 1 Championships. “I think he started to doubt himself and whether wrestling was the right sport for him, but he’s always been able to deal with the setbacks and keep going. It really is inspiring to me and to those around him.”

Things changed on Sunday and an important lesson was driven home.

“My first thought after that last match was that all the hard work and perseverance had paid off. It was crazy, even when I was weighing-in that morning I didn’t see myself winning. I was just taking it a match at a time. When I beat the kid that beat me, which I thought was a fitting way to finish compared to how this season went for me in general, when I pinned him, it was kind of an unreal feeling to reach that point. It was the last match of the season and I had won.”

There’s no hiding Sam’s exuberance for being a part of the winner’s circle. “Every match I’ve ever won is big. But especially on that stage it was crazy. It almost didn’t sink in until a day or so after. I had never come close to placing in the past and to come in as a lower seed, it was something I had never gotten out of the sport before. To basically be able to cut my seed in half, I think that can be attributed to everything I’ve put into wrestling beforehand, this season and in past years.”

There is a new sentiment that comes with Sam’s resilience now. It is a confidence that only exists when one knows they have paid the price to earn their success. And it has already changed his goals for the future. “I think you keep some of the same elements as far as hard work and preparation is concerned, but the goals have certainly changed. My goal is not just to place again. I want to win the section next year as a senior.”

“Going into this season, I wouldn’t have thought that was a possibility but now I actually believe that I can accomplish this next season.”

“He is a living example of when you want something and you refuse to allow yourself to get discouraged you will eventually find success,” Coach Jacobson explained. “This lesson he was able to get through wrestling at Edgemont is hopefully one he will take with him in all his endeavors for the rest of his life.”