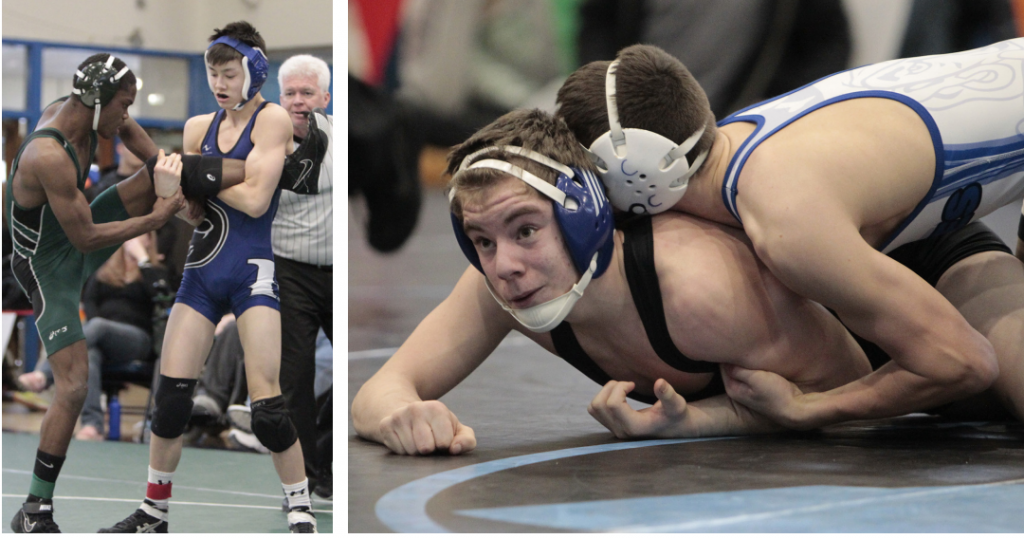 From The Scarsdale Inquirer (PDF of full article).

Edgemont wrestling has been competing to win a Section 1 Division 2 team title for several years, but the title has eluded the Panthers. This winter there was no way Edgemont was going to compete. Or so the outside world thought.

Putnam Valley won the team title with 233 points. Pearl River was runner-up with 224. Both teams had four champions. With only one champion, Edgemont took third place with 210 points. Nanuet took fourth at 195, Pleasantville fifth of 14 teams at 170 points. After the first day of competition at Westlake on Friday, Feb. 13, the Panthers trailed only Pearl River 110-102. Putnam Valley sat in fourth with 87 points.

“I think overall everyone wrestled amazingly for the team, definitely exceeded my expectations,” junior Kyle Aslanian said. “We came into this tournament with 17 guys and most of them were first-year wrestlers and most of the first-year wrestlers were underclassmen. For having as many guys placing as we did is amazing. I think everyone pulled their weight this year more than I expected.”

Edgemont had five wrestlers in the top three, which earned them All-Section. Sophomore Cliffton Wang won at 152 pounds, Aslanian was the runner-up
at 120, senior John Lee the runner-up at 285, sophomore George Mellor third at 113 and senior Brian Evans third at 145.

“Our younger kids are awesome,” Jacobson said. “Everyone said we’d be the fifth best team this year. Everybody. We took third. I think we should have done better than that. I know what kind of team we have. They don’t settle for what people expect.”

Another year, another title
Wang repeated as champion and he’s catching up to older brother Ray, who won three titles for the Panthers and placed third in the state as a senior in 2009-10. Proud older brother was watching from the front row at sectionals and younger bro expressed his excitement in Ray’s direction following pinning Pleasantville’s Thomas Marrone in the finals in 3:40.

“Just like last year I felt like I came too far to lose and I’m trying to build a legacy here,” Wang said. “I really improved on getting more aggressive on
my feet, a lot better than last year. Last year I didn’t shoot at all in the finals. On top I did really well riding. Overall I think I’ve improved a lot.”

Like many young first-year state wrestlers, Wang did not fare too well, but it was a tremendous learning experience freshman year.

“I have been here before, so it gets a little less nerve-racking,” Wang said. “I just have to do my own thing, wrestle hard and not be afraid of anybody. I’m really excited about going to states this time. Last year I wasn’t ready for it.”

From the day he left the Times-Union Center in Albany last winter, Wang has been preparing for his return Feb. 27-28.

“He’s ready to go,” Jacobson said. “He was ready to go six months ago. There are very few people in the state that I would say Cliffton can’t hang with. I don’t know if there’s any. He showed that at Eastern States even when he didn’t win. He gets better every time he wrestles because he works hard. In his mind he has to get better every day. It’s not acceptable to him to leave practice unless he feels he got better from the day before. That’s 365 days a year with him. It’s a lifestyle. He lives that lifestyle.”

Kyle’s close call
The one that got away from Edgemont was defending champ at 106 pounds Aslanian, who won his 100th career match in the final dual meet of the season against Rye Country Day School’s Arthur Nahashim. Aslanian, at 113 pounds this year, had the misfortune of Pearl River dropping down from large schools to small schools this year, which meant an old nemesis, James Kelly, also a defending champ from last year, would be in his bracket.

Aslanian had faced Kelly as an eighth-grader and freshman and despite competitive matches, was 0-3. They had not seen each other since the Edgemont Tournament in 2012-13.

With 50 seconds left in the second period of the finals, Aslanian trailed Kelly 5-0. With 10 second left, Aslanian got a reversal and with two seconds left back points to trail only 5-4. Aslanian was unable to score in the third, falling 6-4.

“Kyle got beat in a couple of positions by that Pearl River kid,” Jacobson said. “That kid is real solid on his feet. Kyle wrestled great on bottom, great on top. It was the little positioning that was the difference in the match. He was right there with him and I know he knows he’s right there.”

Aslanian was disappointed, but gracious in defeat. For him it was another learning experience. “There are a few positions from neutral that I think if I just fix those small mistakes where he got two points I think that would have helped a lot, would have probably been a gamechanger,” Aslanian said. “I think from top I did really well. I think I need to get that fine-tuning to get turns off when I get crosswrists.”

Aslanian was hoping to get a wild card to states, since he feels he has unfinished business there from last year. He is the first alternate and would replace Kelly or one of the four wild cards from around the state should any
of them drop out.

“I still want to win a state title,” Aslanian said. “Even though I didn’t win here it’s still possible for me to win if I get that wild card. I’ll be training as hard as I usually do, not changing too much, maybe going a little bit harder, working the positions I didn’t do well on today and just wrestle hard.” 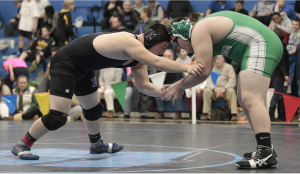 Late-comer Lee
Lee was the team’s third finalist and had some unique circumstances. Lee is a first-year wrestler who only had 18 matches coming into sectionals, but benefited from a small six-man bracket at super heavyweight. As the second seed he had a bye in the semifinals.

Lee was slated to wrestle as a junior, but tore his ACL during football. As a senior he decided to honor his commitment to give the sport a try.

“Wrestling is one of the hardest things I’ve ever done,” Lee said. “Many times I wanted to quit, but I was just glad to come to sectionals and even though I lost in the finals, I’m glad I stuck through it.

“Coming in here as a senior, even though I was strong, I was big, I just didn’t know some of the moves you really needed to know. Sometimes they got the better of me, just like today, but it was difficult because there’s a lot of pressure put on the coaches and they definitely care a lot. This group of guys are definitely one of the most dedicated and hardest working kids I’ve worked with and it’s a privilege to say I was part of the Edgemont wrestling team.”

Lee worked with other firstyear wrestlers Lou Russo and Kofi Keteku, who also came from football, along with the coaching staff, most notably fellow big-man Matt Lee, a 2007 Edgemont graduate.

“They definitely got me ready,” Lee said. “I only had 18 matches, but I had all the practices with the coach and all the one-on-one time. They put in a lot of hours with me and I’m 100 percent appreciative.”

In the finals, Lee was pinned 1:01 into the match by Irvington’s Adam Kreiger, a much heavier opponent compared to the svelte Lee.

“Because there were only six kids, I got the full first day off,” Lee said. “It gave me a lot of time to prepare and think and come into today with the right mindset. I wrestled well in my first match and got myself to the finals. Adam’s a great wrestler, great kid, worked hard, big kid, definitely got the best of me, but I wish him the best of luck at states.”

All-Section honors
A finally healthy Evans didn’t end his final year with the title he wanted, but to take third place — unfortunately over teammate Worobow — and earn All-Section honors was a proud moment.

“It’s obviously not the result I wanted — I worked hard all year — but for me, personally, it proves something to me that I wrestled back hard and came back and took third,” Evans said. “It’s not what I wanted, but I got the team points and at the end of the day it’s about the team.”

Evans was oft-injured over the years and had a big moment by winning the Edgemont Tournament last month in a match that showed his growth and maturity in the face of adversity. Since that moment he had the best wrestling month of his career.

“Brian’s the hardest working senior on our team,” Jacobson said. “He really fought this whole tournament. When he started to lose his composure, which is something he’s dealt with, the toughest battle he fought was reigning himself back in. His semifinals against Pleasantville was circled on his sheet. He didn’t win, but I think my proudest moment ever of him as a coach was that match because he was dealing with some things and things weren’t going his way. He dug deep and almost pinned the kid in the third period, had him on his back when he was losing. He knew he had to give it a shot and he went for it. He powered through from there.”

Edgemont wrestling likes to build champions and men, and that’s what happened with Evans.

“Wrestling for Edgemont is probably the best decision I’ve ever made in my life,” Evans said. “I love Pete. He’s the best guy. I was crying after my match. I don’t know what I’m going to do without him in college. But it changed me as a person. It made me better with my work and made me an all-around mentally tougher person.”

What Evans wants to leave behind is that the journey is the most important thing.

“I hope that the young guys realize that when you lose it’s bitter and it sucks and you want to quit, but you’ve got to stick with it,” Evans said. “In the end you know it’s hard, but every second that you wrestle is worth it. It’s the best sport on earth.”

Mellor rounds out Edgemont’s All-Section team. In his final match of the tourney, Mellor topped Josh Rucker of Woodlands 3-1 for third place.

“He beat a kid who had beaten him twice this season,” Jacobson said. “We thought we were going to see this kid in the thirdplace match. We had it circled. We’ve been working for the last two and a half weeks on a game plan to beat this kid and he executed the game plan to a T and it worked. When he lost to this kid the kid controlled the match both times, but for a high school kid to lose twice like that and then not back down and accept the status quo, that’s a huge thing.” 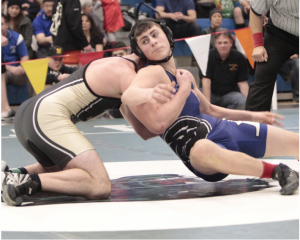