I was going through our photos from this season and we’ve got a ton of awesome ones – thank you to our parents (especially Annette Meglino) and to Coach Marsh’s special lady friend, Sallee, for the great photography! (You can check them out here.)

And then I came across this one photo I’d forgotten about, but in retrospect really changed the course of our season. I’ll get back to that in a second, though.

As many of you know, throughout our season we had 1 or 2 team meetings each week before practice where we focused on our Panther Tough values and developing the culture we knew we needed to be successful. Before the season started our coaching staff had several long discussions about whether we thought these meetings would be a good use of our limited time. We thought about it and debated over it and tweaked the idea many times over.

When we took a step back and looked at our program’s mission, “Building Champions on the mat and in life,” we realized this was something we had to do. Developing our student-athletes to be tough as nails on the mat, and also to be gritty, resilient and able to conquer life’s many challenges is the core of what our program is all about. To not focus on those things and tie them back to wrestling would be ignoring the essence of what high school athletics should be all about.

Not only that, buy let’s face it, this sport is hard.

It’s not easy to step out on the mat by yourself, all eyes watching, and compete against an individual, looking to physically dominate you – a competition where, win or lose, you are solely responsible and accountable for the result. Think for a second how difficult it is for adolescent wrestlers to put themselves in that position day after day with their parents and friends watching.

We knew that for our program to turn the corner, our wrestlers needed to know that their team was there for them no matter what. That they could step out on the mat to compete and know they have the full strength of their teammates and coaches lifting them up and supporting them unconditionally. That they can compete like fearless warriors because they know failure is a necessary ingredient to ultimately finding success.

Life is the same way and we knew we needed to teach them that.

So there’s the story behind our semi-weekly team meetings. We didn’t realize at the beginning of the season what a profound effect focusing on our team and culture would have on our program. When you deal with something day-to-day it’s sometimes hard to see the gains that happen incrementally over an extended period of time.

That’s where the photo I mentioned above really drove the point home to me. It’s from one of our first team meetings at the beginning of the season where, together, we discussed the qualities we’d all strive to bring everyday this season to be the best we could for each other. Here’s what the guys came up with: 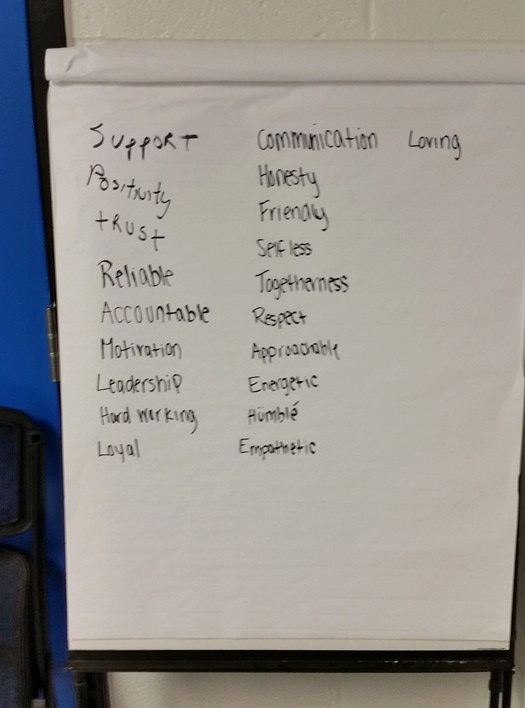 Remembering where we were as a team at that point and where we are now is really astounding. It made all the difference in the world.

Coaching Edgemont Wrestling for the last 14 years has taught me a lot about these qualities as well. Our coaches learn as much as our kids do each year as we ride the roller coaster with them. I think what I learn from the most is the dozens of conversations I have with our alumni and parents of alumni each year. Hearing about the difference wrestling has made in the lives of our guys as they get older and move on with their lives is probably the most impactful kind of interaction I get to have.

Please take a second and think about the impact wrestling at Edgemont has had on you or your son. I’d really like to hear about it some time.

Last but not least, I’d like to end off with another theme that has been an tremendous part of our team culture this season – gratitude. We talked about this every week this year and it’s only fitting to end this email by letting you all know how grateful our wrestlers and coaches are for your support all year! It means the world to us and truly makes a difference when things become difficult.