From The Greenburgh Daily Voice.

NANUET, N.Y. – Colin Hopkins learned his lesson last year when he wrestled Nanuet’s Matt Dillon – be wary of the throws.

The Edgemont junior was not going to allow Dillon to execute his offense. Instead, Hopkins controlled the tempo, wrestled his match and came away with a 4-2 win Wednesday in the 145-pound match.

Hopkins’ win came in a 48-19 loss to Nanuet in the Section 1 Division II Dual-Meet Championship final. It is the second consecutive year Nanuet beat Edgemont for the title.

“I knew he liked throws and to go for the big move,” Hopkins said. “I wanted to stay low and avoid the throws. He’s also very strong, one of the strongest guys I’ve wrestled. I also knew that I could wrestle better than I did against him last year.”

Hopkins took bottom for the third period, reversed Dillon for a 2-1 lead, but the Nanuet senior escaped to even the score at 2-2 with one minute remaining in the match.

Dillon went for an ankle pick and appeared to be on his way to a takedown, but Hopkins did not panic. He countered and it resulted in a takedown and the decisive two points.

“I’ve been in that situation before so I knew I could find a way out of it,” Hopkins said. “I felt more confident in my defense today, where in the past I had trouble keeping up with a stronger guy.”

“Colin’s defense has gotten a lot more solid,” Jacobson said. “He keeps his position and he is more mindful of his position. He is very capable of capitalizing on a small mistake by his opponent. Colin has worked hard on everything, top-to-bottom, in the last nine months.” 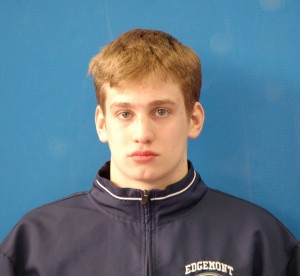