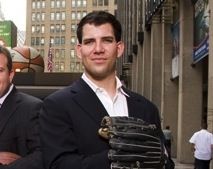 The qualities Edgemont Wrestling develops in its student athletes are those that help them succeed wherever life might take them. The examples of Edgemont Wrestlers succeeding long after they’ve hung up their wrestling shoes are numerous.

One prime example is Ety Rybak ’96. Ety is the founder of Inside Sports and Entertainment Group, a company that offers premium hospitality programs and unique corporate entertainment opportunities to companies and individuals at the world’s premier sporting and entertainment events.  Since its founding in 2004, InsideSEG has grown into a 27-employee outfit that recorded $45 million in revenue this past year.  We recently caught up with Ety as he spoke about what Edgemont Wrestling did for him.

Ety was not the most storied wrestler in Edgemont history, but he always felt his work ethic was always something worth noting.  His efforts culminated in him becoming a captain of the team his senior year.  He would walk away from his high school wrestling career with a rewarding experience, but he is the first to admit he did not immediately realize how helpful it truly would be to his future endeavors.

“At the time, I was probably too young or immature to really understand the skills I was picking up.  Obviously at the time I knew it was good for me, but didn’t know exactly what I was learning.”

The skills and discipline Ety learned on the mat were used as he graduated college and began his professional career with the NBA league offices.  But his true potential lay dormant until he branched out and started InsideSEG.  It is with this company that Ety draws on his wrestling experiences to find his great success.  “I found myself in a situation similar to wrestling.  I started my own business, and success in business is completely determined on how much work you are willing to put in.”

Ety thrives off of the feeling that it is all up to him and his commitment to his career is a clear indicator.  He is not a stranger to working long hours every day of the week.  In fact, Ety prides himself on the fact that he is always willing to go the extra mile to outwork his competitors, a trait he picked up from his days at Edgemont.

“If you were just going to practice, you would only be getting the bare minimum.  But if you are training and preparing outside of the practice schedule you can get a leg up.  Even if your opponent has some type of advantage, if you put in more work than them you’re inevitably going to see the results eventually.”

“I apply that hard-working mentality I learned from wrestling at Edgemont in everything I do in business today.”

Ety believed so much in the value of these lessons that he came back to Edgemont for several years as a volunteer assistant coach with the program, hoping to pay the lessons he learned in high school forward.

As InsideSEG grew, however, Ety found he no longer had the time to keep up with his coaching. He turned his focus more to his company, realizing that sometimes sacrifice is a necessary ingredient to success.

“It’s not easy, but the sacrifices are what makes the success that much sweeter,” he admits.  “I learned that from wrestling, too.  You are always sacrificing time and energy spent elsewhere in order to succeed. You have to have a healthy fear of failure and an understanding that making sacrifices will help you succeed. Wrestlers probably know that better than anybody. ”

Ety uses recently crowned State Champion, Trey Aslanian, as an example.  “Trey came into this year’s State Championships with a couple losses under his belt.  He was probably a little bit afraid of finishing high school without getting that title.  All the sacrifices he made to win that last match, at the time its tough but the pay off is well worth it.  And I’m sure any past losses makes this win that much sweeter for him.”

“I feel the same way about professional success.  It’s hard to pick up on it as a kid, but coming back and coaching after college, and being in the adult world, you really get perspective.”

“Pete [Jacobson] always says ‘control the things you can control and make the most of it’. So if you work hard every day you will see results.  That’s exactly the same in business.”

“Most kids don’t see the high-level success during their competitive wrestling careers, but even at the time it’s still worth it. It’s hard to understand that early on, but the competitive fire that wrestling can light more than any sport, the mental discipline, to be successful – that’s the most important thing wrestling can teach you.”

A lesson Ety Rybak and many Edgemont wrestlers over the years have taken to heart.