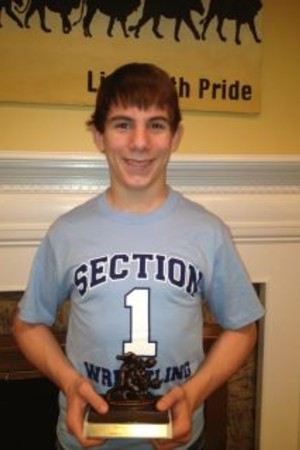 From The Daily Voice.

EDGEMONT, N.Y. – Trey Aslanian always knew he was going to continue wrestling in college, but the Edgemont High School senior wanted to maintain the balance between his academics and wrestling.

Aslanian focused on three excellent academic institutions in Princeton, Harvard and the University of Pennsylvania. On Wednesday, Aslanian revealed that he will attend Princeton University next year and continue with wrestling.

He is a three-time Section 1 Division II champion and three-time state place-finisher.

“It was a tough decision, because Penn and Harvard are also excellent schools, but I felt Princeton was the best school for me, and it was too important to pass up,” Aslanian said during a break in practice Wednesday.

Even though wrestling is Aslanian’s passion, his parents have always ingrained in him and brothers Tyler and Kyle that schoolwork comes first.

“Schoolwork has always been our main priority in our house,” said Aslanian, who plans to major in economics. “When we get home from school we have to do our schoolwork first. Then we can go to wrestling.”

Aslanian explained that when he and his brothers were younger, his parents would promise to take the boys to tournaments, but they had to have their schoolwork done.

Now that Aslanian has made Princeton his choice, he can focus on helping Edgemont win a Section 1 Division II title.

“We have a bunch of guys with a lot of talent, and I’ve wrestled with many of these guys since pee wees,” Aslanian said. “As a team, we have the mindset that this is our last time together, so we want to make the most of it.”