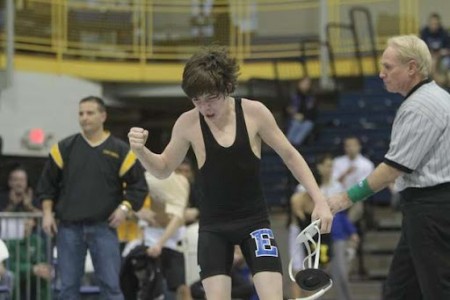 The Edgemont Panther Wrestling program today released its competition schedule for its 2012-2013 campaign. “We’re excited to kick-off the season and pick things up where we left off last year. The attitude of our athletes in the pre-season has been great and our schedule will really push our athletes and help them develop,” said Head Coach Pete Jacobson.

Edgemont Wrestling enters the 2012-2013 Season having been undefeated League Champions for the past three seasons and Section 1 Team Runner-Up for the last two years.

The Panther’s season kicks off on Wednesday, November 28th with the annual Blue and White Match where members of the team will wrestle-off for starting spots in the month of December. The first tournament competition begins that Friday, November 30th at the Tony Carlucci Duals at SUNY Purchase.

On Friday, January 25th, the Panthers will be taking the quick bus ride across the Bronx River to Scarsdale High School where they will take on the Raiders in the annual rivalry match, The Bronx River Cup. After the two program’s junior high teams compete, the Varsity squads will take the mat at 6:00 PM for the always-close dual meet match-up. The Panthers look to bring the Cup back home after a close defeat in 2012.

Other highlights include, challenging tournaments such as the Center Moriches Duals on Long Island where the Panthers will wrestle nine dual meets in two days against some of the best competition on Long Island on December 15th and 16th; the newly-created Southern Sections Small School Scuffle – known as the S-5 Duals – on January 5th where the Panthers will face the best small school teams from across Long Island, New York City and the Hudson Valley; and the Eastern States Wrestling Classic – dubbed “the toughest tournament in New York State” – on January 11th and 12th.