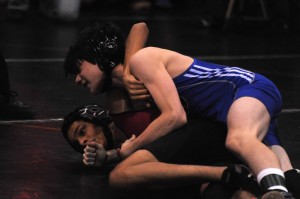 Max Worobow ’16 helped lead the Panthers to a victory against the Woodlands Falcons.

The first action of 2013 brought Woodlands Sr. High School to the mats at Edgemont Sr. High School, and the Panthers looked resolved to continue their winning ways.  Coach Jacobson liked what he saw, stating, “The team was really up for this match and it showed on the mat.  We had a full gym for the dual, which is rare for us and the guys really put their best foot forward in a dominant performance.”

The Panthers got solid performances from the likes of Trey Aslanian, Colin Hopkins, and Chris Kim, but it was the success of three other wrestlers that helped fuel the team’s victory.

Freshman Max Worobow, who normally wrestles at 113 pounds, came through for the Panthers at the 120-pound weight class in a hard-fought decision against an upper-classmen from Woodlands.  Marc Ficuciello also came out victorious against one of Woodlands’ top performance at 145 pounds.  Finally, Coach Jacobson gave credit to a strong performance in the JV matchup, “Sam Charnizon also looked real tough at 132 pounds.  The team really rallied behind those matches.”

The Panthers will be looking to rally behind this win and others like it as the 2013 portion of their schedule continues.