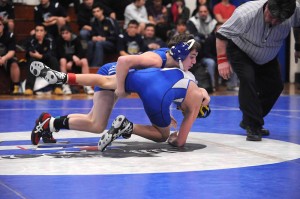 The Southern Section Small School Scuffle was exactly that, as some of the best small schools in the region came together to compete.  The Edgemont Panthers, although shorthanded due to injury, looked to prove their depth against these talented programs.

The Panthers proven wrestlers, such as Trey and Kyle Aslanian, showcased their skills as they both went 5-0 on the day.  Trey Aslanian did not give up an offensive point the entire day.

As impressive as they were, Coach Jacobson gave credit to the aforementioned depth of the team.  “We were a little depleted, but everyone we brought down there wrestled hard. It was great to see some of our guys who are not our bigger names really show their development. Jon Fleischmann, Sam Klein and Sam Charnizon really wrestled hard and showed improvement each match.”

With a considerable amount of injuries, Coach Jacobson welcomes the opportunity for these capable young wrestlers to show their talent. “The ability to continually test our guys against quality programs is something that forces them to keep raising the bar. I think we got a good feel for where we stand individually and got some great experience that has already shown benefits this last week of training.” 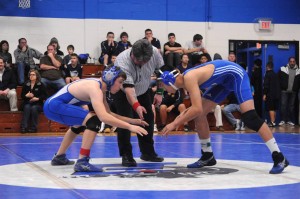 Cliffton Wang ’17 placed in his first varsity tournament at Ardsley.

The Ardsley Tournament was another chance for the less-experienced wrestlers of the Edgemont Panthers to gain valuable Varsity-level time on the mat. Max Worobow  and Dylan Huff split the day with 2-2 and 1-1 performances, respectively, both showing their continued development. Clifton Wang, the only 8th grader on this Panthers squad, finished 4th overall at the 138 pound class.  He ended the day with three wins, two of which were by fall.

“As a coach, you love to see that kind of development in your younger wrestlers. It’s a testament to the hard work they’ve been putting in and their desire to be leaders in their own right, not just standing in the shadows,” commented Coach Jacobson.