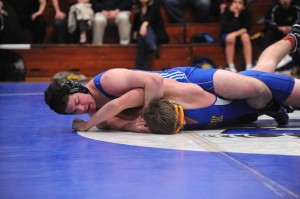 Jason Worobow ’13 decided the match for the Panthers securing a team victory over Eastchester.

Last Tuesday, January 8th, the Panthers competed against Eastchester High School in a dual meet that already had them trying to get over the challenge of injury and 24 points to their opponent due to forfeits.  Coach Jacobson reflected on the events in the gym that day:

“We always talk to our younger wrestlers about how these are types of opportunities they should get excited about. Opportunities where they have the chance to step-up and show where they’re at. We went with a line-up that really depended on a lot of these guys and put them in a position where they didn’t just have to be better to win, but be more than 24 points better. They really rose to the occasion. The feeling in the Eastchester gym was something really special for this team. Our older guys knew the outcome of this match really revolved around our less-experienced guys and the support and enthusiasm was really awesome. Every time we scored a point, you could hear our bench go crazy. That’s a great atmosphere to compete in, especially when you’re on the road.”

The performance of five Panthers gave the momentum and the eventual victory to the Panthers.  Max Worobow was once again wrestling at 120 pound and came away with a huge pin in the 2nd period.  Riki Mistry did the same at the 126-pound weight class.  Sam Klein, battling the flu as well as his opponent at 132 pounds, really impressed the Panthers’ coaching staff.  “Sam bumped up for us knowing how important his bout was.  He looked sharper than ever on his feet and picked up the fall,” said Coach Jacobson.

Will Graybeal, who lost his match, also received plenty of praise from Coach Jacobson.  “Will also bumped up to 145 to take on Rob Lalli, one of their best kids. Will fought hard, kept it close and was able to give up only a 3-point decision which in the end made a big difference for us.”

The entire match would rest on the shoulders of Senior Jason Worobow.  The Panthers could have wrestled Jason at 195, ensuring a victory for the team, but Coach Jacobson was confident in his team and wanted to test Jason against a skilled opponent at 182 pounds.  “A big part of our philosophy is to test our kids and put them in high pressure situations whenever we can. We did just that with Jason and he didn’t let us down. After a scoreless first period, Jason took top and got a turn to end the second period up 4-0. He capitalized on another opportunity he created in the third period to score a takedown and ultimately win the match for us.”

So far, 2013 has seen many examples of unsung heroes for the Edgemont Panthers.  After duals like this and as those well-experienced wrestlers continue to get healthy, the Panthers have put themselves in a great position for the end of the season.