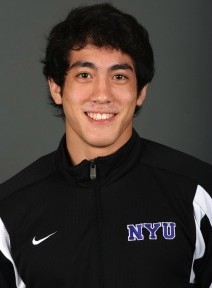 Sometimes, a lack of success can be an opportunity in disguise.  No one knows this better than David Rice ’08.

David was a basketball player.  In the 8th grade, he tried out for Edgemont’s team and was cut.  After being turned away from his sport of choice, he decided to give wrestling a try, a sport he had no experience in.

“I was actually worse in wrestling than I was in basketball,” David recalls.

David began his wrestling at Edgemont on their modified team in the 8th grade.  Practices were a struggle, as he had little knowledge of the sport and also lacked the strength and confidence that wrestlers depend on.  His debut on the mat ended abruptly as he was suffered an elbow injury in his first match and was out for the remainder of the season.

“For whatever reason, the next year I decided to still go through with it.”

David found himself starting on the Panther’s varsity squad at the 103 lb weight class.  How was this transition made? “We didn’t have anyone else wrestling at the class that year,” Coach Jacobson remembers, “He basically had no choice but to step in for us.”

The results were to be as expected for such an inexperienced wrestler.  David did not pick up a single victory that season.

His record did not improve during his sophomore year because he was not competing as a starter.

“It was tough going from modified and being thrown right into varsity,” David admits when thinking back.  “I was already behind on modified and now I had to try and play catch-up at the varsity level.”

This seemingly impossible task could scare away an athlete with little connection to his sport.

“There was still something about it that kept me going.”  That certain thing was taking advantage of the opportunity to improve off the mat.  “I decided to really take to the lifting program Coach Pete [Jacobson] had and I went to the open mats to get better. “

His junior year saw David finish at around an even win-loss record.  Coach Jacobson attributes that to his dedication off the mat.  “He kept training hard.  He really believed in himself when no one outside our room really did.”

The summer before his final season at Edgemont was David’s turning point.  He had been training hard and had attended elite wrestling camps.  But he attributes what happened that season to another offseason activity.

“Coach Pete got me and a couple of others to write goals for ourselves before the season.  At the time all I thought about winning Sections and being named All Section.  I never thought about States.  But coach helped me think about the bigger picture.  If I believed and put the time in at practice, and had that State Championship in mind, come senior year, this really was the difference.”

David would go on to win the Section Title in a thrilling double overtime match against a rival from his summer training.  David admits, “He beat me up all summer.  It was a great feeling to get that win.”

Aside from his victory on the mat, David was voted Most Outstanding Wrestler of the entire tournament at any weight class.

His success at the Section Tournament allowed David to accomplish his overall goal: wrestling at States.  With his 6th place finish, David became Edgemont’s third ever All-State Wrestler.

David continued his wrestling career at NYU.  As he did in his early days at Edgemont, David faced adversity in his first two seasons and was injured during his junior season.  After being granted an additional year of eligibility, David returned from injury and wrestled hard, beating several top ten ranked wrestlers.  This resulted in a top 3 national ranking at the end of his junior year, and a national rank of 8th during his senior season.

“I’m in a tough weight class now, I’m top ten in the nation but haven’t been able to make it to nationals.  It stings but I have learned to roll with the punches in times like this.”

“This was obviously a huge disappointment for him,” Coach Jacobson observed.  “But he made his entire career out of achieving successes that no one other than himself and his coaches thought were possible.”

A setback like this does not get in David’s way these days.  His secret?  A practice he learned before his senior season.

“When I have a goal in mind now I always make sure I write it down.  If it is something long term, I will have sub-goals, but it always helps to have it written down and to see that goal every day.  When I’ve been studying forever and just beat down with schoolwork, that wrestling mentality has helped me get over that, makes me feel like I’ve done harder things.  I have Edgemont to thank for that.”